Happy Friday everyone! I hope you all had a wonderful week and that you'll have a fantastic weekend! Today we we have a promo spot for K.E. Saxon's Diamonds and Toads: A Modern Fairy Tale. I think modern takes on old fairy tales can be so much fun, take a peek at Diamonds and Toads below which can be purchased at your favorite online book retailers! 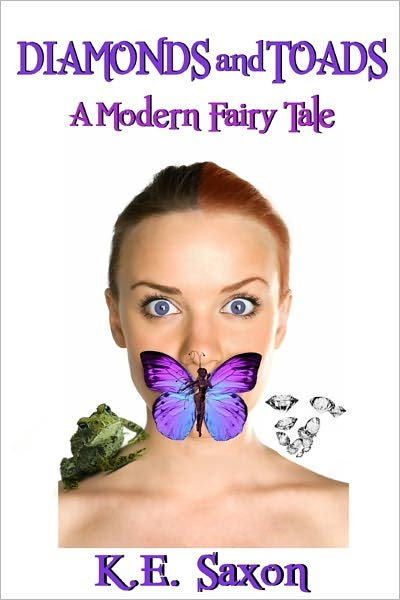 Diamonds and Toads: A Modern Fairy Tale
By K.E. Saxon

Once upon a time, there were two sisters, one blessed,and one cursed by fairy magic...
So each sister's story begins.
Delilah Perrault is blessed with riches beyond her wildest dreams and the man she's had her eye on for ages--even though he secretly has designs on her newfound wealth instead. Delilah's half-sister, Isadora, is cursed with having her every utterance come out as an obscene and humiliating quip, just when the gorgeous hunk she dumped years before under pressure from mama swaggers back into her life.
If you like Bewitched, Sex and the City and Gossip Girl, try out this modern girl's fairy tale.

Part One: Diamonds
PROLOGUE
Delilah Perrault fanned the perspiration from her cheeks with the folded Houston Press she’d snagged out of the dispenser and took a bite from her chocolate bar. She was supposed to meet Chas Regan here in front of the main branch of the Houston Public Library for lunch, but she was so nervous about it, she’d run down to its basement and bought the candy from the machine.
No, she wasn’t really hungry, and yes, she knew she shouldn’t be eating sugar and fat if she wanted to get that last six pounds off before the gala at the Crystal Ballroom eight days from now, but her compulsive need to fill her mouth with food wouldn’t let her be.
An old beggar woman in a faded-to-purple pea coat with a stained and frayed scarf around her neck pushed her shopping cart filled with—Delilah was sure—the woman’s life possessions across the cobbled pavement a few feet from where Delilah sat.
The poor thing looked as shop-worn as Delilah felt.
She glanced toward Delilah then dropped a hungry gaze to the candy bar.
Delilah lifted the cold Coke from the short marble wall she was sitting on and walked over to the woman.
“Here. You’re welcome to both of these, if you would like? I haven’t eaten much of the candy yet—Or—would you like me to buy you something else?” She scanned the area. “I’ll bet there’s a deli or something in that building over there. I could get you a sandwich?”
“What a kind girl you are. But no, these will do just fine.” The old woman captured the fare, captured Delilah’s gaze. Her eyes, silver blue and bright, were more youthful than Delilah expected.  Odd. Shivery goose bumps formed on Delilah’s arms. “I have a sweet tooth, don’t you know,” the woman continued.
“Oh—” Delilah jerked a nod. “Okay.” She turned away from her and walked back toward the two-foot-high granite wall she’d been seated on earlier.
“Bless you, Lila, dear,” the woman said.
Delilah stopped short.
A loud crack! split the air and Delilah whirled around. A sudden scent of patchouli filled her nostrils. All around her, a rosy watercolor haze washed over the landscape. A giddy bubble of fear tripped up Delilah’s spine as a spray of glitter dust drifted in the space where the woman had been. And in her place, a yellow parrot perched on the handle of the cart, staring at her from one beady black eye.
Delilah hawked a reflexive cough and something small, hard, and cold fell from her mouth into her palm. “Sweet Jesus, Mary, and Joseph.” A diamond.
* * *
CHAPTER ONE 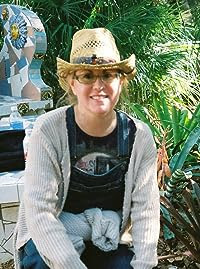 K.E. Saxon is a third-generation Texan and has been a lover of romance fiction since her first (sneaked) read of her older sister's copy of "The Flame and the Flower" by Kathleen E. Woodiwiss. She is a member of the West Houston Chapter of Romance Writer's of America and is a devoted subscriber to the Romance Divas online forum. She has two cats, a 24-year-old cockatiel, a funny, supportive husband, and a garden that's been fried by the recent drought. When she isn't in her writer's cave writing, you can find her puttering in her organic vegetable garden or in her kitchen trying out a new recipe. An animal (and bug) lover since before she could speak, she made pets of all kinds of critters when she was a kid growing up. Her mother even swears that she made a pet of a cockroach one time (but K.E. doesn't believe her). She likes to write funny, sexy romances.
Website: http://www.kesaxon.com
Blog: http://www.kesaxon.com/blog.html
Twitter: @KESaxonAuthor
FB: http://on.fb.me/nqScVw
~*GIVEAWAY*~
K.E. Saxon is graciously giving away two digital copies of Diamonds and Toads. To enter, just leave a comment on this post and fill out the rafflecopter below!