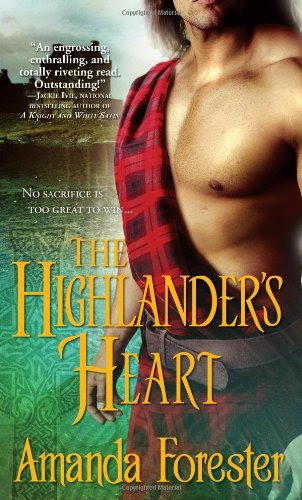 
Fleeing into the wilderness to escape an abusive marriage, Lady Isabelle Tynsdale would sooner face down a wild boar than spend another night with her wretched husband. Battered by the elements, desperate to elude a band of attackers, and defending herself against, as fate would have it, a wild boar she is rescued by the handsome Laird David Campbell.Campbell knows holding Isabelle captive for ransom is his best chance to temper the storm threatening to destroy his clan. The ransom of an English countess should be more than enough to pay off his debts to England and save him from an unwanted marriage. But Isabelle didn't escape her husband just to become another man's captive and Laird Campbell is seriously misguided if he thinks she's going to go quietly.


My Thoughts:
Amanda Forester continues her tale of courageous Highlanders in the majestic beauty of Scotland with The Highlander’s Heart.

After the death of her guardian and uncle, Lady Isabelle Tynsdale sets off on a journey to the King to request his help in dissolving her marriage to the vile Lord Tynsdale, who will surely murder Isabel to inherit her uncle’s lands. On the border of Scotland however, her guard runs into that of her husband’s and Isabelle runs for her life. Lost and disheveled, wondering a lone road, Isabelle is set upon by three men with dastardly intentions when the fearsome Laird David Campbell comes to her rescue. The first of many.  Surprised with finding herself in Scotland, Isabelle asks Laird Campbell for help returning to England only to have him decide to ransom Isabelle to her husband instead. Determined to escape before her husband comes for her, Isabelle uses every means possible to get away only to end up in David’s arms every time.
Laird David Campbell is a highly respected Laird but with many responsibilities; taking care of his clan, his many siblings and arranging a suitable marriage for himself. Finding himself informally betrothed to two women after his parent’s deaths, David must decide between a friend and powerful ally in the Stewarts, the Steward of Scotland and his foster family the mighty Douglas’, each who has their own political agenda to gain that conflict with one another.  When he happens upon a lady in danger he knows she is sure to be trouble but even though she is English he is instantly attracted to her and as they journey through Scotland he cannot help being intrigued by her until he discovers that she’s a Countess on the run from her husband. Betrayed, David holds her for ransom and intends to return Isabelle to her husband believing her proper place is with him. But the more time David spends with Isabelle the more he comes to care for her. When the time comes, will he be able to let her go? Even if the cost of keeping her puts his clan, and the whole of Scotland, in danger?


The Highlander’s Heart falls eight years after The Highlander’s Sword and makes a great stand-alone novel. I enjoyed The Highlander’s Heart so much more then the first novel, the story was full of romance and adventure with political intrigue, captivating characters and an engaging story. Amanda Forester is a master at weaving a tale in this time period, the 14th century. Immersing the reader in the well-detailed world she has created in the wild beauty of the Scottish Highlands.


The romance in this novel was better balanced out with the action as opposed to what I found in the first novel. Still light and leans more towards a Christian Romance, the story is well written and will immerse you fully. Strong religious tones are present as well but I found this refreshing and enjoyable. The relationship between David and Isabelle was sweet and funny; and their banter highly entertaining. Their relationship seemed hopelessly doomed from the beginning and throughout the novel I couldn’t see a HEA being possible but the ending was satisfying and heartwarming, leaving me with a little happy sigh. J I loved both main characters and thought them a perfect fit for each other. Isabelle lent David a shoulder at exactly the right moments, she was a strong heroine, daring and smart. She didn’t always make the right decisions but had good intentions. David was sexy and honorable, protective of his family and those he called his. His responsibilities always came first, even over his own happiness. A very endearing character to say the least.
The sub-plot of David’s sister Cait falling in love with the enemy was just as intriguing as the main plot and I couldn’t help rooting for this unlikely couple.


A wonderful novel that I loved reading; I would recommend this to any historical romance fan looking for a good, clean read.

Sexual Content: Light/clean romance with adult situations. Not recommended for smut-only lovers but would be good for Christian romance fans. =)
Posted by Crystal @ RBtWBC at 11/29/2011 12:00:00 PM