Good morning everyone! Today is Tuesday which is as well all know, release day, and what better way to celebrate it then to tell you about a great new series? Check out author Kayden McLeod's Foxworth Coven!


Even unconditional love cannot always banish an eternal nightmareThe Foxworth family has blazed a trail through human and vampire history alike, changing the ways of both races in Canada for all time. The Council has demanded a full report for the long and twisted tale of how the Surrey Coven had come to be the most powerful and feared; an assemblage that anyone would question before coming up against.The Leader of the Surrey Coven, Canya recalls how her family came to be. A story filled with pain and heartache, until she meets Gregory Foxworth: a debonair CEO to the family shipping company. Gregory remembers taking her away from a life that shocks him, hoping to shelter and love her. But little does he know all he has done, was make her a target for a sadistically warped man. One who will have her and his own personal brand of vengeance. Sometimes, a grudge is forever.


The sunlight shone over the light sprinkling of white snow. Her hair caught the surreal light, throwing blue highlights through the strands that now stretched past her waist. She’d always enjoyed the outdoors. It was one of the many things about her that had dragged my attention, and held it so securely. “I want you to realize just how important nature is to us. We draw our power from everything around us. We need blood to live, just as the land needs to be fertilized. But this is our world Canya—not the city. Look around you.” I held my arms out to encompass everything from the trees, to the ground, to the sky. I wiggled my fingers and the snowflakes on the ground rose into the air, dancing at my bidding. They swirled into a small tornado, moving over the flagstones to where she stood. Her laughter flowed over the picturesque landscape when she plunged her hands into the snow, coming up with a lump that she packed hard with her hands. A wicked light entered her eyes as she strolled forward. I’d been caught up in the swing of her hips, so sensually seductive. And then she threw her white orb at me with deadly accuracy. It pelted me on the forehead while I’d stared at her body like the haven it was meant to be. Dancing away from me she giggled. I gave chase when she caught up her skirts and took off into the middle of the yard. “I am going to get you for that,” I called to her, knowing I could catch her at any time, but giving her the illusion of safety. “I’m counting on it.” Dark thoughts were forgotten as I flicked both hands and the snow fell from the evergreen branches above her head. White flakes rained down around her, creating a solid sheet in every direction. I watched her turn left and right looking for me, amusement bright on her face. “This isn’t fair, Greg! How can I compete with this?” Canya called into the snow. She moved forward and never left the enclosure while it moved with her. I stayed just far enough away, always behind her that she never found me. “You shouldn’t throw those orbs at me then,” I whispered in her ear, moving with inhuman speed when she whirled, but I wasn’t there. Canya chuckled as she plopped down into the snow. I watched her curiously as she began to pack more snow. “Snow-balls Greg, they are called snow-balls. Get into this century.” I couldn’t contain my laughter at her snide comment. Her head snapped up in the direction where I’d been. A snow “ball” came flying, exactly where my head had been. “I am in this century, here with you.” I moved behind her, quiet as a mouse. She’d made a rather large pile of projectiles, completely oblivious. “Actually you are not here with me. It would seem, for all intents and purposes that you’re hiding from your fiancé. I think you are scared of getting pelted again.” Her teeth flashed in the sunlight, the wall of snow creating a safe cocoon for her. I grabbed her around the middle and she shrieked in my ear, tossing her over my shoulder with snow still grasped in her hands.
“Scared of a little witch like you?” I laughed as she tossed the snow over my head backward. I playfully slapped her enticingly vulnerable bum, while being slung so helplessly. “This is a very interesting predicament you have put me in.” “Whatever predicament do you refer to?” Her mind became blank, carefully not thinking of anything. Her tiny hand slid down my back, sending shivers through me the cold could never compete with. My own moved down her body and over her backside, so lightly she shuddered. My breath caught in my throat. It was the first time we had touched in such a manner. Now I feared if I didn’t stop, I would drop her to the ground and indulge in every fantasy that had kept me up at night. It wasn’t that I hadn’t had sex before, but it had been a very long time. Once Canya had moved in, I’d not taken a single lover: vampire or otherwise. More often than not, blood and sex intermingled so tightly that one often led to the other, no matter which came first. Sex was commonplace for us—as easy as breathing and we partook in it just as often. My body grew hot and tight enough, I thought it would drive me insane. I wanted to run my tongue over every inch of her luscious skin. To lose myself in her mouth, move down her body with delicate slowness, until her cries pushed me over the edge. “You are a cruel woman.” I set her on her feet. The look in her eyes made me growl with frustration. My body protested, needing to touch her again in any way she saw fit. Canya looked like a mythical siren or a nymph, purely tempting. I had no problem with succumbing to this particular temptation, except perhaps her feelings on the matter. It was too soon. I knew this, though that did not make it any easier to bear. “Revenge is always sweet. Since you’re mine now, I think it is acceptable.” She pranced past me. I flicked a hand in the direction of the whirling snow, and it fell harmlessly to the ground.


Love conquers all...and evil seeks to destroy it. Arcadia Foxworth has no idea what destiny has in store for him. He thought his life as an elite Council Hunter of Rogues was his perfect career choice. But little does he know his fate truly lies in one little powder keg, Korbin Callows. She’s beautiful, graceful—and a stripper. After having woken up, remembering nothing about her old life, Korbin had to pull herself together and make tough decisions to survive a harsh world. And now people she doesn’t even know are out to kill her. She finds herself relying on Arcadia to maneuver the new dangers presented to her, as she starts to recall who she really is. A powerful being that could make every vampire in British Columbia fall to their knees, including Arcadia. 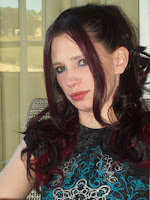