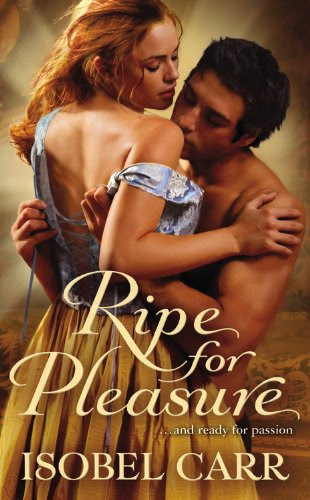 Second in line, first in loveA secret society of younger sons, sworn to aid and abet each other, no matter the scandal or cost.... Their fathers and brothers may rule the world, but they run it . . . and when it comes to passion, they refuse to accept second best.
Searching for hidden treasure,finding forbidden fantasy.London's most sensual former courtesan, Viola Whedon, is incapable of being seduced-she does the seducing. Until she meets Leonidas Vaughn. Her salacious memoirs have made her the target of half the lords in England, and Vaughn is the only man she can turn to. When he promises to protect her-and to make her beg for his touch-the alluring beauty finds both offers impossible to refuse.
Leonidas Vaughn secretly believes Viola possesses a fortune given to his family by the King of France. So the strong and sexy Vaughn charms his way into Viola's life . . . and her bed. But when their arrangement is consummated, he'll experience pleasure far beyond his wildest fantasies-and realize his heart may need the most protection of all.

GoodReads
Lexy’s Thought’s:
When you are a second son you are usually not left with much of anything save a name. Lucky for Leonidas (Leo) Vaughn he has been left with property and the means to support himself if he can scrape by. When he finds the equivalent of a treasure map he follows it with the hope to save his property. Leo fully expects to find treasure, it’s just not the type of treasure he was expecting to get his hands on that has him falling head over heals.


Viola is a strong woman who has dealt with the cards life has left her with. After sad circumstances have left her in the occupation of a courtesan she had to make decisions that pointedly left her heart out of the equation. But once she meets Leo and he begins to wear her down she realizes that her heart might be what makes the choice this time around.


This is a very sweet quick easy read. It is a nice chance of pace to read about a second son who doesn’t have all the benefit of a title and money. Instead both characters have had to fight for themselves for so long they don’t quite know how to let each other in. Good thing they can’t deny the sexual attraction boiling beneath the surface.

Rating: 3 Wine Glassed - Liked it
~*GIVEAWAY*~
Interested in checking out this second son for yourself? We are giving away this ARC copy to one US reader, just fill out the rafflecopter below!