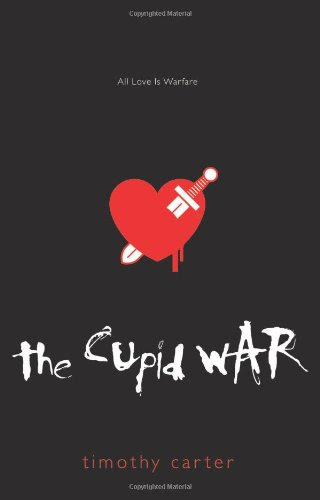 The Cupid War
by Timothy Carter
Paperback, 264 pages
Expected publication: August 8th 2011 by Flux
ISBN 0738726141
Ricky Fallon had decided against killing himself — just before slipping off a bridge to his death. Now he's a Cupid in the afterlife, helping people fall in love. The job would be cool if it weren't for the dorky pink bodysuits, his jerky boss, and attacks from joy-sucking shadowy entities called Suicides.
When Fallon discovers a dangerous new breed of Suicide, a terrific battle erupts. To save the girl he's falling for — oh, and prevent total world domination — Fallon uses a secret weapon to kick some serious Suicide butt.

All You Desire
Eternal Ones #2
by Kirsten Miller
Hardcover, 416 pages
Expected publication: August 9th 2011 by Razorbill
ISBN 1595143238
Haven Moore and Iain Morrow have been living a blissful life in Rome, an ocean way from the Ouroboros Society and its diabolical leader. But paradise is not to last. The mysterious disappearance of Haven's best friend, Beau, sends the pair running back to New York, where they encounter the Horae, an underground group of women who have spent centuries scheming to destroy Adam Rosier. Only they can help Haven uncover the secret to Beau's whereabouts in one of her past lives. But their help comes at a price: Haven must infiltrate the Ouroboros Society, charm Adam Rosier, and lure him into a trap. It's a plan the Horae believe will save the world-but Haven and Iain fear that it may destroy the happiness they've been chasing for two thousand years.

The Shadow of Death
Thirst #4
by Christopher Pike
Paperback, 496 pages
Expected publication: August 9th 2011 by Simon & Schuster Children's Publishing
ISBN 1442413190
The conclusion to the phenomenally successful Thirst series follows five-thousand-year-old vampire Alisa Perne as she battles a new race of immortals: the Telar. The Telar are a challenging threat. But Alisa is hungry for blood - and thirsty for revenge. 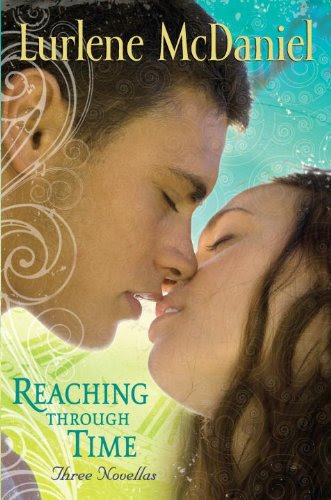 Reaching Through Time: Three Novellas
by Lurlene McDaniel
Hardcover, 240 pages
Expected publication: August 9th 2011 by Delacorte Books for Young Readers
ISBN 0385734611
What's Happened to Me?
Sarah finds herself in a strange place, and she can recall only one thing—her name. A young man, Heath de Charon, explains to Sarah that he found her unconscious on the grounds of his family's estate and has been caring for her. Sarah is thankful, but when she starts hearing voices that whisper for her to come back, she is confused, and desperate to find out where she really belongs.

When the Clock Chimes
Drake Iverson lands a summer job on Sandstone Mountain. There are no computers; he has to do all the work by hand in a large leather-bound book. He doesn't mind, as long as he can be near Gina, who is pretty and kind. But when Gina falls ill, Drake is asked to leave. He is determined to find out what happened to Gina and to uncover other mysteries he encounters on Sandstone Mountain.

The Mysteries of Chance
Dylan Sorenson offers his help to a girl who seems to be in distress. The girl, Maura, explains that she's simply overwhelmed by the heat and quickly runs off. But Maura is soon drawn back to Dylan and a friendship and budding romance begins. However, Maura doesn't reveal the whole truth about herself, and Dylan has secrets of his own. Can their relationship withstand the deception? 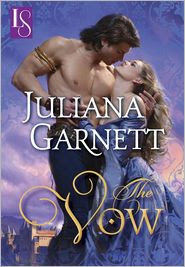 The Vow
by Juliana Garnett
Mass Market Paperback, 368 pages
Re-release by Random House
Channeling the passion and pageantry of another time, Juliana Garnett weaves a tale of sworn enemies for whom surrender might as well mean death-until they meet each other.
Dispatched by William of Normandy to quell a brazen Saxon rebellion, Luc Louvat believes that his mission will be easily accomplished. For what foolish Saxon lord has any hope against an army of seasoned Norman knights? But the great warrior is infor a shock: His adversary is no crusty, aging nobleman but an exquisite princess who looks as fragile as a flower-and yet fights with a will as steely as the sword she wields. Suddenly Luc is waging a dangerous new war-aimed at the defenses of a fierce Saxon beauty who threatens to conquer his warrior's heart.
Ceara is a ferocious warrior and proud daughter to the Saxon lord of Wolfridge, and any man would be a fool to challenge her. So how could she ever surrender to this hulking mercenary sent by the Norman bastard who has already taken so much? Ceara has made a sacred vow to fight at all costs, never yielding to her enemy. But that was before she met her match in Luc, the one man who could rival the intensity of her courage-and the heat of her passion. 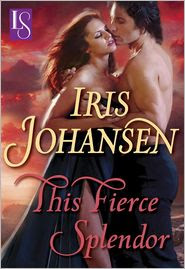 This Fierce Splendor
by Iris Johansen
Mass Market Paperback, 256 pages
Re-release by Random House
ISBN 0553269917
In a classic historical romance from #1 New York Times bestselling author Iris Johansen, a bookish beauty and her rogue guide go in search of a city lost to the sands of time-and find a burning passion.
Ever since she was a little girl, Elspeth MacGregor has dreamed of completing her father's quest to find the legendary lost city of Kantalan. After poring over textbooks, atlases, and tribal legends, Elspath knows everything there is to know about the ancient metropolis-except how to reach it. Now she's made the journey toHell's Bluff, Arizona, in search of the man who may be her last hope ofreaching Kantalan, despite his dangerous reputation . . . or maybe because of it.
The last thing Dominic Delaney needs is to lead some stubborn scholar around on a wild goosechase. A wanted man, Dominic has never had time for fairy tales. But there's something about Elspeth's fiery determination that has him willing to suspend disbelief .. . and something about Dominic that has Elspath falling for the wrong man. Now, to reach the magnificent riches of Kantalan, the mismatched pair must first conquer the dark mysteries of desire.

Dr. Ellie Sullivan has just completed her residency at a large urban hospital. While jogging in a park nearby, she witnesses the shooting of an FBI agent in pursuit of wanted criminals, a couple identified as the Landrys. The only person to see the shooter's face, Ellie is suddenly at the center of a criminal investigation.

Agent Max Daniels takes over the Landry case. A no-nonsense lawman, he's definitely not the ideal man that Ellie has always imagined, yet she's attracted to him in a way she can't explain.

Ellie heads home to Winston Falls, South Carolina, to attend her sister's wedding. Shortly after she arrives, though, she receives a surprise visitor: Max Daniels. The Landrys have been captured, and she'll be called to testify. But they've been captured before, and each time the witnesses are scared into silence-or disappear before they can take the stand. Max vows to be Ellie's shadow until the trial, and it isn't long before sparks fly. 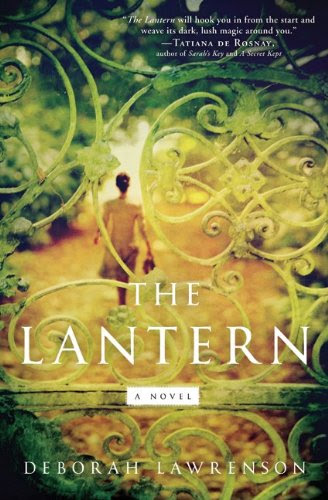 The Lantern
by Deborah Lawrenson
Hardcover, 400 pages
Expected publication: August 9th 2011 by Harper
ISBN 0062049690
When Eve falls for the secretive, charming Dom, their whirlwind relationship leads them to purchase Les Genevriers, an abandoned house in a rural hamlet in the south of France. As the beautiful Provence summer turns to autumn, Eve finds it impossible to ignore the mysteries that haunt both her lover and the run-down old house, in particular the mysterious disappearance of his beautiful first wife, Rachel. Whilst Eve tries to untangle the secrets surrounding Rachel's last recorded days, Les Genevriers itself seems to come alive. As strange events begin to occur with frightening regularity, Eve's voice becomes intertwined with that of Benedicte Lincel, a girl who lived in the house decades before. As the tangled skeins of the house's history begin to unravel, the tension grows between Dom and Eve. In a page-turning race, Eve must fight to discover the fates of both Benedicte and Rachel, before Les Genevriers' dark history has a chance to repeat itself.