I was honored today to have Jenn over at Frequent Reader, Infrequent Blogger have me over as her featured blog of the month. I brought along a review of Maya Bank's KGI series (Books 1-3) 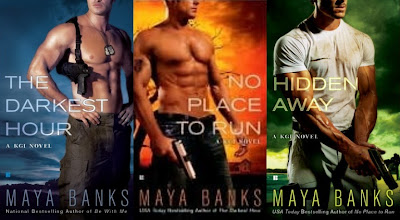 The Kelly/KGI Series is a dark and sinfully sexy romantic suspense series that centers on a tight-knit military family, the Kelly’s. There are six Kelly brothers, all of whom served in different branches of the military and together form a special private security agency called the Kelly Group International, which take on the missions that even the government can’t handle.  These brothers are hard-bodied, sexy alpha males that will have you swooning in no time; and with each book featuring a brother’s own HEA you receive plenty of danger, sex and a roller coaster of emotions when these sensuous military men must fight for the women they love.
The first book in the series, The Darkest Hour, centers on one of the younger Kelly brothers, Ethan Kelly. Ethan is an ex-Navy Seal grieving for the wife he lost a year ago. When he receives an anonymous package on the one year anniversary of her death, claiming that Rachel is really alive Ethan will do anything to find her and keep her, even if that means raiding a drug cartel’s camp in the middle of the jungle. The Darkest Hour is an emotionally intense novel all about second chances; with plenty of scorching hot romance, action and subterfuge that makes for edge of your seat perfection with a sizzling main couple and a dynamic cast of secondary characters.
No Place to Run continues the series with the eldest of the Kelly bothers, Sam. Being the oldest, Sam is extremely protective of his family and takes his responsibility over the whole Kelly crew very seriously. When a woman from his past washes up in his lake though, his protective instincts rise to a whole new level. On the run from her family, Sophie Lundgren’s only hope for her and the life of her unborn child is Sam, her baby’s father. Swift moving and heart stopping, No Place to Run is sexually charged and full of excitement providing non-stop entertainment as a superb addition to the series.
Hidden Away is the latest book in the KGI series and my favorite so far, centering on the second eldest Kelly brother, Garrett Kelly who insists on being on each mission and protecting his brother’s backs. After being injured on his last assignment though, taking a bullet for his newest sister-in-law, Garrett is forced into some down time. However an all-expense paid beach vacation courtesy of the US government isn’t so bad, especially since all he has to do is keep an eye on the lovely Sarah Daniels, who after witnessing a murder committed by her brother is in hiding. The possible capture of her murdering brother who Garrett holds a personal grudge against is just a bonus. As he gets closer to Sarah though and the more he learns about her the more he respects her and starts to fall for her. But when Sarah is caught in the middle of the only two men she has ever loved which one will she choose? Gripping, sizzling and breathtaking, Maya Banks weaves a riveting story of heart break, intrigue and trust. Banks delivers one hell of a ride with Hidden Away and I was enthralled from the first page. The first love scene was so intense, I didn’t even realize that I was holding my breath until it puffed out when he finally shouted her name!
These are my first Maya Banks reads and they will definitely not be my last! If you like contemporary romance, romantic suspense or even just plain old suspense novels then I recommend her KGI’s to you. I cannot wait for the next addition to the series, even though it won’t be Donavan’s who I am really looking forward to.  Each character in this mind blowing series is smart, sexy and compelling; leaving me craving for more more more!
A without-a-doubt, a five-wine glass-must-read series!