To celebrate the release of John G. Hartness newest release in The Black Knight Chronicles, Knight Moves, I'd like to welcome you to the Knight Moves Release Day Blitz! 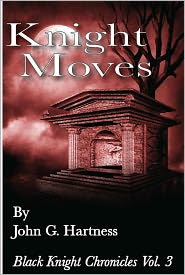 In the third installment of The Black Knight Chronicles, vampire private investigators Jimmy Black and Greg Knightwood find another vampire (or more) playing in their sandbox, and the boys are NOT happy about it. While tracking down the killer of a young college student, they encounter boobytraps, defenestration, coeds, a hirsute bounty hunter with a moon fetish and a bad attitude, and worst of all - game night at a comic shop! This comic urban fantasy series has drawn comparisons to The Dresden Files, Buffy the Vampire Slayer and Kevin Smith movies. Knight Moves is the followup to the kindle best-selling Hard Day’s Knight and Back in Black.

John G. Hartness is a poet, actor and novelist from Charlotte, NC. He is the author of the urban fantasy series The Black Knight Chronicles and the stand-alone novel The Chosen. His work has been compared to Kevin Smith, Joss Whedon, Jim Butcher and other grown men who spend too much time in comic book stores. He likes bluegrass, fried pickles and cheap beer.
Website - http://www.johnhartness.com
Twitter - @johnhartness
Facebook - www.facebook.com/johnghartness