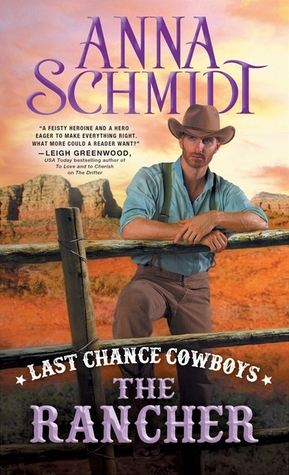 
"You can't be sure we're doing the right thing," she said.
He drew closer to the barbed wire separating them. "It's impossible to know what's right. But it doesn't stop me from wanting you."

The world is changing, and the West isn't as wild as it used to be. Trey Porterfield welcomes a new era of law and order―and the influx of settlers coming to the Arizona territory. But not everyone is willing to see the old ways change, and as the cattlemen and the herders take sides, a full-blown range war may be inevitable. There's only one way Trey can see to bring peace to his feuding neighbors.

Nell Stokes is a young widow fighting just to stay alive. In Trey, she sees a chance to heal old wounds and start over. Love was never in the cards, yet as Trey and Nell fight to unite the feuding land, they'll discover a passion neither could have expected...and a danger far greater than either has ever known.

When Trey reached home it was after dark and he rode straight to the bunkhouse. Javier sat on the banco outside the door, his arms folded across his chest, his legs outstretched and his hat covering his face.
“Javier!”
Trey reined in his horse and dismounted. By the time he had covered the distance between the horse and his friend, Javier was standing, watching closely as he clearly tried to judge Trey’s mood.
“¿Qué más, jefe?”
Trey grabbed his friend by his shirtfront and backed him up to the wall of the bunkhouse. Never before had he laid his hands on Javier in anger, but this time the man had crossed a line that friendship couldn’t forgive. “You tell me.” He stared at Javier, who met his gaze briefly, then glanced away.
“Not sure what you’re….”
Trey shook him. “The Stokes place last night—and the night before. You have anything to do with that?”
He had his answer before he finished the question. Javier scowled up at him, meeting his eyes directly. “You gotta choose a side, Trey.”
Trey felt an anger unlike any he had ever experienced in his life. It was born of frustration and exasperation, and fear. The fear that after the decades that his parents,  his sister Maria and her husband had managed the ranch successfully, despite all kinds of human and natural disasters, he might be the one who failed.  He gave Javier one more shove and then released him.
“Why do there have to be sides? Why can’t we all just live here and work the land and….”
While Trey might be quick to anger and quicker to let things go, Javier had no trouble showing his rage. He stepped closer to Trey and, with no pretense of modulating his voice, shouted, “You know why, Trey, and stop pretending you don’t. Them damned woolies chew the grass down to the nub, all the while their sharp hooves finish the job by digging up whatever’s left by the roots. This used to be open range—cattle range—and now we’re supposed to share it? You got any idea how far we’ve had to drive the herd to find decent pasture for the summer? That’s because of them.”
“And that makes it all right to terrorize a widow and her sick son for two nights running?” Trey roared in return.
Javier studied him hard for a long moment. They were both flushed, their fists clenched, their bodies poised for a fight. Javier was the first to step away. He stared down at the ground waiting for his breathing to calm, then looked up at Trey. “You falling for that sheepherder’s woman, my friend?” His tone was sympathetic.
Trey pulled off his hat and ran his fingers through his sweat-slicked hair.  “She’s an innocent in this fight, and I just don’t want to see anybody else get hurt, Javier. There’s got to be a way we can work this out. They aren’t going away—and neither are we.”
“We were here first,” Javier said, his voice petulant.
Trey allowed himself a wry smile. “Technically the Indians were here first and look what we did to them. After that it was the Spaniards—your ancestors. And they raised sheep, my friend, long before cattlemen showed up.”
The two of them leaned on the corral fence and gazed out into the black night for a long moment. “This isn’t just about sheep versus cattle, Javier. The truth is things are changing—everything about the life our parents knew is different. Every year another new town springs up or spreads out. We either learn to live with that or we spend the rest of our time on this earth fighting against progress that’ll surely beat us in the end.”
“So what’s your plan?” Javier asked.
Trey shrugged. “Don’t have one—just the notion we need to make this more about how we’re gonna live in peace and less about needin’ to be right.”
“Let me ask you something, Trey. If that woman and her boy weren’t part of this, would that change the way you look at it?”
“I hope not—but yeah, maybe.”
Javier pushed away from the split rail fence. “Got to give you one thing—she’s awfully pretty, and from what I saw of her at the church social, she’s not afraid to stand her ground. She’s got conviction. You need somebody like that, Trey. Too bad she’s on the wrong side of things.”
Trey bristled. “Need someone like her? Is that how you see me? As a man who needs somebody to speak for him because I’m too weak to do it myself?”
“You’re strong in ways I’ll never be able to understand, Trey. But you’ve got this way of thinking that everybody’s as good as you are. Few are. Most folks are a blend of good and bad. Nell Stokes appears to know that.”
“I know that.”
Javier shook his head. “Trouble is you have this idea you can change those other folks to come around to your way of seeing things.”
“It’s called hope,” Trey argued.
“It’s called impossible.” Javier glanced back at a couple of the other cowboys coming out of the bunkhouse, stretching and yawning. “We got the night shift,” he said, as he pulled on his hat.
Trey turned to the other hands. “You boys head on out. I need Javier here to help me.”
“With what?” Javier’s eyebrows lifted with suspicion.
“Come morning we’re gonna pay a call on Henry Galway and see if we can work something out—a council or something to start decidin’ what’s fair. And then you are going to apologize to Mrs. Stokes for scaring the bejesus out of her and her son. But before we do any of that we’re gonna head for the Stokes place and see if we can repair any of the damage done there before she and her boy get home. Get some rest, Javier—we leave at daybreak.”


Where the Trail Ends


Anna Schmidt is a three-time finalist for the coveted RITA award presented annually by Romance Writers of America. In addition she has been a four-time finalist for the Reviewer’s Choice Award from Romantic Times magazine—an award she has won twice. Her latest novel THE OUTLAW (Book Three of her Last Chance Cowboys series) will be published in July. Book four—THE RANCHER –will be out in January, 2018. Publisher's Weekly had high praise for Anna's WWII series--THE PEACEMAKERS--stating that Schmidt seamlessly integrates...actual events, and the courageous real-life individuals who fought against Hitler’s regime, with her fictional characters and their story, to produce a strong tale of hope and love in the face of insurmountable obstacles." The author of over thirty works of historical and contemporary fiction, Anna has worked in the corporate world for two international companies, taught at the college level and is a popular presenter of hands-on workshops. She splits her time between Wisconsin and Florida, noting that, “I am blessed to have a career that travels well!”  http://www.booksbyanna.com