The Pack or the Panther by Tara Lain (Guest Post/Giveaway)

Knocking My Alphas Off Their Pedastals


Hi everyone! I’m so happy to be here. I’m Tara Lain and I write The Beautiful Boys of Romance. I’m introducing my new paranormal novel, The Pack or the Panther, and it’s all about werewolves and panther shifters. Werewolf books are generally the territory of the purest alpha males -- and, at first glance, my hero Cole Harker is no exception. He’s six-foot five, weighs over 200 lbs, can “hear a tadpole at the bottom of a stream”, shift at will even without the full moon, and can even smell weapons. He’s the master of wolves!

BUT, I write the Beautiful Boys of Romance. Ask any of my readers and they’ll tell you that Tara can’t resist messing with her alpha males. Somehow they come out sensitive, with a touch of insecurity, sometimes full-on quirky, and of course, beautiful! So my super alpha, Cole, may be powerful, but he’s also tongue-tied in groups and gay. This is in a society that pretends there’s “no such thing as a gay werewolf”. While his community is happy to accept his dedication and his power, they won’t acknowledge him for who he is. My poor alpha.

I love doing this to my heroes both in paranormal and contemporary romance. In Spell Cat, my main character is the most powerful male witch in 10 generations, but he can’t find a man to love him, while my firefighter surfer hero in F.A.S.T. Balls questions his own intellect and longs for a real relationship with someone who doesn’t make him feel dumb.

Why do I knock my alpha males off their pristine hunky pedestals? I’ve discovered that there’s a theme that runs through all my books. I never intend for it to be there, but it always is. The theme is living an authentic life. While authenticity may be particularly challenging for gay people because of the potential for discrimination and prejudice, it’s universal to all of us. Finding a way to express who we are no matter what we look like or what people expect from us, lives in our hearts. I love giving this gift to my heroes. I want them to be brave against all odds and find love in the most unexpected places. After all, you can’t judge an alpha male by his cover. 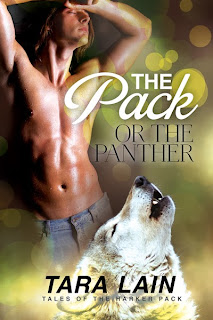 
Cole Harker, son of an alpha werewolf, is bigger and more powerful than most wolves, tongue-tied in groups, and gay. For twenty-four years, he’s lived to please his family and pack—even letting them promise him in marriage to female werewolf Analiese to secure a pack alliance and help save them from a powerful gangster who wants their land. Then Cole meets Analiese’s half-brother, panther shifter Paris Marketo, and for the first time, Cole wants something for himself.
When Analiese runs off to marry a human, Cole finally has a chance with Paris, but the solitary cat rejects him, the pack, and everything it represents. Then Cole discovers the gangster wants Paris too and won’t rest until he has him. What started as a land dispute turns into World War Wolf! But the bigger fight is the battle between cats and dogs.

Cole’s lips turned up just a smidge. “Uh, you look good. I wasn’t expecting to see you.”

“What the fuck?” He threw his hands in the air and collapsed in a wing-back chair.

“You came to my show. Of course you expected to see me.”

“Uh, I mean I didn’t expect to see you off stage.”

Paris frowned. What kind of game was this? “What in the hell are you talking about? You came here to get me.”

“I didn’t come here for you at all. I remembered that you said Eliazer came here to see you, and it was the only place I knew to look for him. That’s why I came.”

“Not for me?” He wanted to scream and he wanted to cry. Which one would win?

“No. You said to leave you alone.”

“You son of a bitch!” Paris leaped out of the chair and hurled himself across the room at Cole with his fingers extended like claws. He hit the wolf like a missile and scratched at his face. “You bastard. You sucked me in and got me involved with your ridiculous pack crap.”

“Wait. Hold on.” Cole wrapped a huge arm around his middle, pulled Paris’s back against his chest, and held him with his feet off the floor. The big, dumb, bastard!
Paris kicked his feet, which was humiliating. “Let me go.”

Paris shook his head wildly. Frustration. “Why did you—? Why didn’t you—? Shit!”
“Uh-uh. You’re just a confused kitty.”

He had to stop this. Heat pushed behind his eyes. Damn. What was going on? The words flew out. “You didn’t come for me.”

For a second Cole said nothing. “You said you didn’t want me. Hell, you practically tore down your parents’ office door proving it.”

Cole loosened his grip just a little and let Paris’s feet hit the floor, though his strong arms still held Paris’s body tight. It felt way too good. “So why should I come looking for you?”

“Because you want me?”

“What gave you your first clue?” His voice held laughter.

“The nine-inch steel rod sticking in my butt?”

A big hand slid down the front of Paris’s robe. “Oh, like the tentpole I see you’re sporting?”

Cole’s fingers brushed the silk robe aside and closed around Paris’s erection. “Tell me you don’t want me.”

“I don’t.” But his hips were thrusting his cock into Cole’s hand. Liar hips.
Cole pressed tight against Paris’s butt. That big cock nestled between his ass cheeks. More!

Oh hell. He was burning up! He turned in Cole’s loosened embrace and grabbed his face, pushing his mouth hard against those carved lips. He reached down, managed to pull Cole’s zipper past that hard-on from heaven, and stood on tiptoe so he could rub their dicks together.

Cole pulled back, gasping. “I don’t have long. Lindsey is outside waiting for me.”
A low growl trembled past Paris’s lips. Shit, where did that come from?

Cole’s eyes widened. “Linds? He’s just my friend. But Eliazer is out there. I don’t want to put Lindsey in danger.”


Paris heard his own breath, hot and hard. “Fuck me quick. I can’t stand it if you don’t.”

Tara Lain writes the Beautiful Boys of Romance in LGBT erotic romance novels that star her unique, charismatic heroes. Her first novel was published in January of 2011 and she’s now somewhere around book 23. Her best­selling novels have garnered awards for Best Series, Best Contemporary Romance, Best Ménage, Best LGBT Romance, Best Gay Characters, and Tara has been named Best Writer of the Year in the LRC Awards. In her other job, Tara owns an advertising and public relations firm. She often does workshops on both author promotion and writing craft. She lives with her soul­mate husband and her soul­mate dog in Laguna Beach, California, a pretty seaside town where she sets a lot of her books. Passionate about diversity, justice, and new experiences, Tara says on her tombstone it will say “Yes”!

You can find Tara at