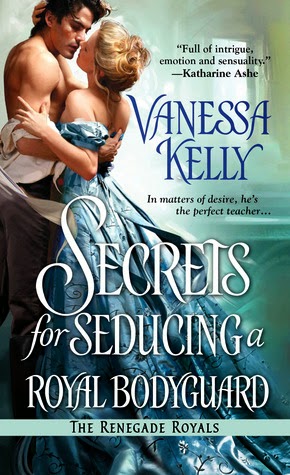 In this witty, sensual new series, Vanessa Kelly introduces the Renegade Royals, illegitimate sons of the Royal Princes who are finding their rightful places in society…

Accomplished spy Aden St. George prefers to stay away from the frivolous ton, especially after the way his mother was used by the Prince Regent. But his latest mission compels him to guard unconventional, vibrant Lady Vivien Shaw. Rescuing her from kidnappers was easy. Resisting her beauty is not. Duty demands he keep an eye on her—and naturally, his lips soon follow. For someone who views entanglements as a weakness, this is pure, delicious folly…

Though grateful for Aden’s help, Vivien has secrets she must keep hidden. Yet with her abductors still at large, she needs Aden’s protection almost as much as she craves his touch…

Historical romances need more spy stories. This could be the hours spent watching the annual holiday James Bond marathon, or the fact that books like Secrets for Seducing a Royal Bodyguard make us fall in love with these dangerous men.
Kelly’s new series, The Renegade Royals, starts out with a kidnapping and a rescue that leads to a puzzle needing to be solved. Aden is the talented spy who saves Vivien from the dank cell, returns her home and finds himself thrust into polite society to guard this fragile beauty. A hell that Aden never imagined he would see again. Sadly, it is also a hell for Viven who repeatedly needs to refuse a toad of a Prince when not trying in vain to recoup her family’s gambling losses at cards.

Kelly introduces secondary characters in the right places and gives them enough personality to compliment Aden and Vivien’s story. Aden’s fellow spies have secrets that tug at your imagination, leaving you ready for book two. As for our hero and heroine themselves, Aden is good at what he does but he has reached a point in his life where he is ready to move on. Thanks to Vivien, who is a pampered beauty with some resolve in her. She toes the line of frail and brave, actually a good mix. She doesn’t faint when things go badly, which they tend to do when running around with a spy.

Secrets for Seducing a Royal Bodyguard is a nicely written historical romance. There are a handful of repeated gestures, most notably eye rolling. But surprisingly, when executed by Vivien or Aden the gesture fits them and makes you smile.  Kelly gives enough teasers to make you wonder what will happen in the coming books and feel sympathy for the other royal bastards. Yet, there isn’t any one thing that pushes past the ‘good read’ level. Enjoyable, yes...engrossing, not quite.

Even though Secrets did not completely wow this reader, book two has been added to the To Be Read list. Kelly gives enough character depth to keep you coming back!