Today I would like to welcome Tori St. Claire, joining us with the third book in her Black Opals series - out today - Explosive!


Good morning, everyone!  Thanks for having me back here today to help celebrate the release of EXPLOSIVE, the third book in the Black Opals series.  I thought we’d kick things off with a little fun:

Top Ten Reasons to Tangle with a Black Opal

10.  Endless Patience – He’ll never lose his cool over something as silly as moodswings, hormones, or a woman’s ever-changing mind.  He also knows when to push or pull according to her…needs.

9.  Resourceful – Almost better than a handyman, a Black Opal can solve virtually any problem, and if he can’t he knows someone who can.  Another perk: he can score from almost any position.

8.  Well Traveled – A Black Opal can bring gifts from exotic places.  He may also have picked up an exotic lesson or two.

7.  Deadly Accurate – Hand him a gun and he’ll never miss.  Oh, and did we mention, he’s an expert marksman when it comes to other, more intimate targets?

6.  Failure is Unacceptable – However impossible the mission is, he won’t quit until it’s accomplished.  Translation: Ladies, he might get tired, but he’ll never stop in the middle.

5.  Charisma, Charisma – When playing at the undercover game, he must be a master at charm to reach his objections.  Another perk: he’s not opposed to a little role play.

4.  Versatility – He’s equally able to hike across the desert as he is to trek through heavy snow, and he can fit into any culture with minimal preparation.  Name the place: he’s ready to play anytime and anywhere.

3.  Alpha, alpha, alpha – There’s no bones about it, an Opal is always in charge.  Make no mistake, this applies to the bedroom too…unless he chooses to surrender control.

2.  Takes Care of Himself – No brawn without real strength here; he’s physically conditioned to weather the harshest environments and knows when to maximize downtime.  Can you say: Hard bodies, soft kisses?

1.  Self-sacrificing:  He’s willing to give up his life to guard the secrets he carries. When it comes to the woman he loves, he’ll die to protect her as well.

And that’s pretty much it folks!  Don’t believe me?  Check out EXPLOSIVE – it’s available for only 2.99 these first two weeks of release! 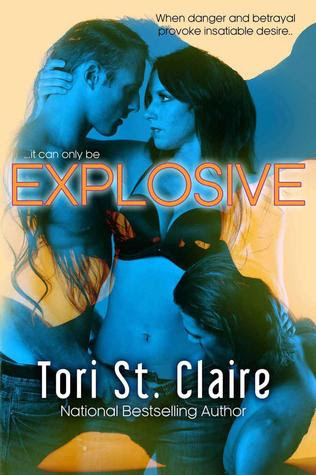 A man on the hunt...
Jayce Honeycutt never imagined returning to his hometown for a wedding would find him confronting the woman he intended to marry.  Nor did he anticipate the passion they once knew would burn as hot and bright as ever.  Only now Alyssa’s involved with Jayce’s former best friend, and Jayce can’t bring himself to interfere.  When he learns Alyssa may be in danger, however, everything changes.  As the threats against her life escalate, Jayce will stop at nothing to unveil the secrets she’s hiding.  Even if it means risking his heart all over again.
A woman on the run…
Ten years ago, a brutal attack forced Alyssa Martin into a world of solitary darkness.  She threw herself into her career, but now her work has led her back into the nightmare of her past and thrust her into a deadly game. When her roommate employs Jayce for her protection, memories compound.  She’s never forgotten their shared desire, and her body still craves his masterful touch.  Yet Jayce is determined to break down her protective walls, and confiding in him is more frightening than the shadows stalking her.  But someone else is determined to control her.  To survive, Alyssa must trust in Jayce and bare herself completely.

National Bestselling author Tori St. Claire grew up writing. Hobby quickly turned into passion, and when she discovered the world of romance as a teen, poems and short stories gave way to full length novels with sexy heroes and heroines waiting to be swept off their feet. She wrote her first romance novel at seventeen.While that manuscript gathered dust-bunnies beneath the bed, she went on to establish herself as a contemporary, and paranormal author under the pen name, Claire Ashgrove and writes historical romance as Sophia Garrett. Her writing, however, skirted a fine line between hot and steamy, and motivated by authors she admired, she pushed her boundaries and made the leap into erotica, using the darker side of human nature and on-the-edge suspense to drive grittier, sexier, stories.Her erotic romantic suspense novels are searingly sensual experiences that unite passion with true emotion, and the all-consuming tie that binds -- love.


GIVEAWAY:
Tori will be giving away three signed print copies of Explosive on October 1st  To enter, leave a comment.  For a second entry chance, tweet this guest post (and include @ClaireAshgrove). Don't forget to include your email address in your comments!