Today Tina Leonard's CALLAHAN COWBOY TRIPLETS releases! Check it out below, read and excerpt and be sure to enter the giveaway! 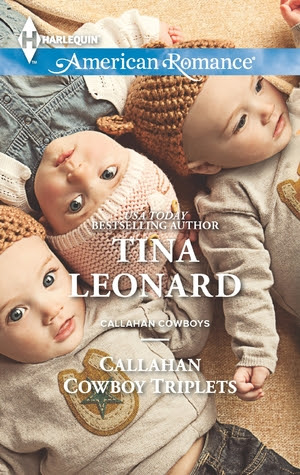 His Callahan Destiny?
Tighe Callahan is wild and free as the wind, until he starts chasing the beautiful River Martin. After he catches her—in a midnight seduction he’ll never forget—Tighe learns he’s about to become a daddy…three times over! Not even an ornery bull can stop him from making River and their babies-to-be his.
Standing down isn’t in River’s vocabulary. Tighe can insist on doing the honorable thing all he wants—she isn’t tying the knot until the cowboy says he loves her. Only, now her wounded warrior’s on some dangerous, life-changing quest.
Tighe’s finally ready to heed the message of his ancestors: defend his land and claim his woman. Because it’s never too late to become the Callahan he was destined to be!

"Tina Leonard uses humor, the Native American culture and beliefs, a wonderful loving family, a bit of magical imagination and a unique romance to bring this story to life. The Callahans will steal their way into your heart and send you rushing to find all the titles in the series.”     -4.5 Ribbons, Romance Junkies

"You can drive yourself crazy trying to outfox a Callahan. That goes double for the Callahan women."
—Bode Jenkins, neighboring ranch owner bragging a bit about his three Callahan granddaughters to a reporter

Tighe Callahan sized up the enormous spotted bull that eyed him warily. "Hello, Firefreak," he said. "You may have bested my twin, Dante, but I aim to ride you until you're soft as glove leather. Gonna retire you to the kiddie rides."

"You're crazy, Tighe," his brother Jace said. "I'm telling you, that one wants to kill you."

"Feeling's mutual." Tighe grinned and knocked on the wall of the pen. "If Dante stayed on him for five seconds, I ought to at least go ten."

Jace looked at Tighe doubtfully. "Sure. You can do it. Whatever." He glanced around. "I think I'll go get some popcorn and find a pretty girl to share it with.

You and Firefreak just go ahead and chat about life. May be a one-sided conversation, but those are your favorite, anyway."

Jace wandered off. Tighe studied the bull, which never broke eye contact with him, his gaze wise from the scores of cowboys he'd mercilessly tossed, earning himself a legendary status.

"I'm a real believer in the power of positive thinking, old son," Tighe told his horned adversary. "And I'm positive that tomorrow my name will live on as the first cowboy to ever pin a bull's-eye on you and hit it dead center. See, I figure it was destiny that I finally drew you. And what you don't know is that I've got a secret training regimen. You think you're tough, but you don't know tough until you've spent a couple years being ridden by Callahan tots. You only have to do your job for eight seconds, throw off a cowboy or two. Me? My job can go on for hours. I'm tough as nails, my spotted nemesis."

Firefreak's response was to throw a hoof his way, crashing into the wall of the pen, which thundered under the blow. Tighe tipped his hat and turned to go.

"Hi, Tighe," a feisty little darling he knew too well said, and Tighe stopped dead in his tracks.

"Sawyer Cash, what are you doing here?" He glanced around. If Jace had seen Sawyer—the new nanny bodyguard at Rancho Diablo and daughter of Storm Cash, their neighbor and a man they weren't too sure they trusted—he would have run up the red flag of danger. Jace had never mentioned it, but Tighe was pretty sure his brother had a thing for the petite redhead.

"Hi, Tighe," River Martin said, coming to join Sawyer, and Tighe felt his heart start to palpitate. Now here was his dream, his unattainable brunette princess—even though he liked to tell his family he secretly had River in the bag—smiling at him, as sweet as cherry wine. "We heard you're going to ride a bull tomorrow, so the girls and I decided to come out and watch. Your sister, Ash, is here, too, but she's chatting up some cowboys. Said she wasn't interested in watching you meet your doom."

This wasn't a good sign. A man didn't need his concentration wrecked by a gorgeous female—and right now, Tighe had a twist in his gut even a few beers wouldn't chase off. Nor did he want said gorgeous, unattainable female to see him get squashed by a few tons of angry luggage with horns. A man needed to seek his holy grail and stare death in the eyes in order to realize that he was but a speck on this earth, and if the woman he adored didn't reciprocate his feelings, well, there were worse things. Like getting stomped into dust by a rank bull.

Dante'd had his five seconds on Firefreak without the woman he loved witnessing his ultimate crash into reality.

But River was smiling at him with her teasing eyes that sent him over the moon, so all Tighe could say was, "Nice of you ladies to come out." To witness my humiliation. I was riding on guts and bravado, and somehow that particular cocktail of courage has suddenly left me stone-cold.

River said, "Good luck," and Tighe shivered, because he did believe in magic and luck and everything spiritual. And any superstitious man knew it was taunting the devil himself to wish a cowboy good luck when the challenge he faced in the ring was nothing compared to the real challenge: forcing himself to look into a woman's sexy eyes and not drown.
He was drowning, and he had been for oh, so long.

USA Today bestselling and award-winning author Tina Leonard writes with humor, sexiness, and fun. With over 2.6 million books sold, she plans to keep writing books readers enjoy. Her writing schedule keeps her very busy with independent heroines and the heroes who love them. You can visit Tina at www.tinaleonard.com, or www.facebook.com/tinaleonardbooks.