*ahem* 'Scuse me, my voice is a little scratchy from all of the yelling this weekend. ☺ Woo. Okay, is everyone having fun? Enjoying the music and all of these sexy rock stars? *turns to give Jake Wethers the up and down as he walks up* Well I'm def. enjoying it enough for all of us! *whispering to the side* Sorry about that folks, Jake has to dash off to the next city for the start of his tour but lookie what I just scored. *waves a piece of white paper in front of the mic* That's right, The Mighty Storms set list for their tour! Ooo...and you see that light imprint of lips right there at the corner. Don't let Tru see that. That will just be our little secret. *wink* I might just have to take this one to bed with me to keep under my pillow, but I will give y'all a quick peak before I do because you all are such a great audience...rock on my friends!

The Mighty Storm's set list for their upcoming tour:

Damned
Hush, Baby
Strangers
Happy Now
Sooner
Hard Beat
Nothing But You
I Stayed Too Long
Don’t Feel A Thing
Through it All
Microscopic
Left Alone
Breath With Me
Whiskey Rocks
Fight the Hate
Everything Is You

Samantha is offering a copy of The Mighty Storm as part of our event-wide rock star giveaway, be sure to enter below! 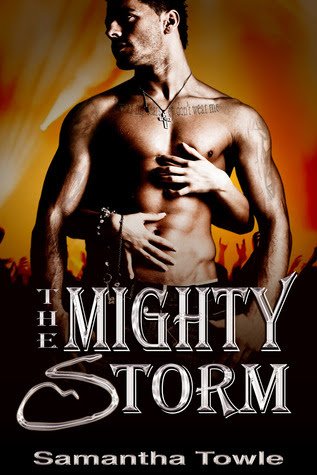 The Mighty Storm
(The Storm #1)
by Samantha Towle
Goodreads - Amazon

Jake Wethers, sexy, tattooed and deliciously bad lead singer, and brains behind The Mighty Storm, one of the biggest bands in the world, left Tru with a broken heart when he moved from England to America with his family when they were both fourteen.

Sent to interview Jake for her music column by the magazine she works for, they are both unprepared for the sparks that fly the instant they reconnect. Only, there’s a complication to their instant feelings for one another—Will, Tru’s boyfriend of two years.

Then Jake makes Tru a job offer she can't refuse—travelling the world with him and his band. But taking the job means leaving Will behind, and being on the road with the band means spending an inordinate amount of time with Jake.

Is Tru strong enough to resist the delectable bad boy who once held her heart so completely, or will she willingly risk it all for one night with the world's most notorious womanizer?

Jake and I were best friends—as close as you could get. And I know it was all he would have, and ever did, see me as. He was always way out of my league.
I guess the sad thing for me, or maybe in hindsight the best thing, was just as I was realising the depth of my feelings for Jake, he was gone.
One thing I do find amusing is knowing how Jake is with women nowadays, basically a slut, when he was younger, he was never interested in girls.
Back then, we were all about the music. I guess it was what bound us together. Well that and the other stuff. The bad stuff in Jake’s life.
Jake was always heavily into music, as was I, thanks to my dad.
My dad used to be a guitarist in a small-time rock band back in the eighties called the Rifts.
I was spoon-fed music. And my dad fed it to Jake too. I think to my dad, Jake was the son he never had.
My life was a little different than other kids’; when their parents were teaching them to sing “Twinkle, Twinkle Little Star,” my dad was teaching me the lyrics to “(I Can’t Get No) Satisfaction.”
I was brought up listening to the likes of the Rolling Stones, Dire Straits, the Doors, Johnny Cash, Fleetwood Mac, and the Eagles, to name a few.
My mum tried to balance it out, bless her, but my dad lives and breathes music, and he is such a force in my life that she never stood a chance. I love my mum of course, but I absolutely adore my dad.
So because of my differences, and there were plenty of them, believe me, I never really fit in with any of the kids at school. And neither did Jake.
We were our own island, and when he left, I was left adrift for a long time.
My dad taught me how to play the piano. He tried with the guitar, but I could never get the hang of it. Jake, on the other hand, was an absolute natural on the guitar. My dad gave him his own first six-string when he was seven. He always did say Jake was a born musician, so I guess it’s no surprise to him Jake is as successful as he is.
My dad is really proud of Jake’s career.
He’s always said I should get in touch with him, but I brushed it off, so there is no way I’m calling Dad to tell him I’m seeing Jake tomorrow. He’d probably try and come with me.
It’s going to be surreal seeing Jake after all this time.
I click off the picture and open another, a close-up of his face. I stare at the picture, my eyes tracing the scar on his chin, the one that stretches along his jawline. It’s not as noticeable as it used to be; maybe he covers it with makeup nowadays.
I know more about Jake than anyone. I know about a part of his past he’s managed to keep hidden away from the rest of the world.
Then a thought sweeps my mind. Maybe he won’t want to see me. Maybe he feels like he left behind the life he had here, and that’s why he dropped contact with me.
Maybe me, home, reminds him of a time he’d rather forget.
Jake had a pretty rough time growing up, which led to his dad, Paul, going to prison when Jake was nine. Susie, Jake’s mum, remarried a few years later to a lovely man called Dale. He was an architect brought over from the firm’s office in New York to work on a long-term project in Manchester, where we lived. Then when Jake was fourteen, Dale was offered a promotion back in their New York office, and he took it.
Six weeks later Jake was gone. And my heart was left broken.
With a resigned sigh, I click off Google, and Jake disappears from my screen.
I force myself to open my Word document to get the questions compiled for tomorrow before I go to dinner with Will tonight.
I don’t go to interviews unprepared. Especially if said interview is with my old best friend and onetime love of my life.