Welcome back ladies and gentlemen, rockers of all ages, to our Birthday Music Festival! I hope that you enjoyed all of the bands, and the masterminds behind them, that joined us yesterday! In case you missed it, Reckless Beat, Oblivion, and Jessica Topper (the lady behind Digger Graves) will be hanging around the festival for a few more days.  And like I mentioned earlier....we might even be able to pretty talk one of them back today!

You've seen the magic that happens on stage, now lets see what goes on backstage! I'll try to tone down the fan girl and not jump this sexed up, tattooed, rock god when I see him. No promises though.

Jessica Topper recently introduced us to Corroded Corpse’s lead guitarist, Adrian “Digger” Graves, and he was not at all what we expected when we heard about this ‘doom metal rocker’ legend. He’s a prep-school dropout, ex-junkie guitarist who quotes Shakespeare, wears Armani with the same casualness as motorcycle boots and maybe he can’t remember half his antics of the crazy 80s but he remembers exactly how you take your coffee on a first date…and did we mention his accent? Swoon!

We were lucky enough to catch up with Digger Graves after his stellar live performance at the RBtWBC music festival to ask him some questions about life of the road. He gave us an exclusive sneak peek of his tour bus and VIP all access into his head!


DG: Happy Birthday…if I had known sooner I would’ve had a cake waiting for you.

RBtW: Aw, that’s so sweet! Thanks for letting us stow away on the bus. Best birthday gift ever!

DG: My pleasure. Welcome to my home away from home! This is Corroded Corpse’s Prevost XLII Entertainer Slide.

RBtW: It’s so big…and so long!

DG: (chuckles) That’s what all the ladies say when they climb aboard.

RBtW: Seriously, do you always let women come on your tour bus…is it all partying and groupies 24/7?

DG: (knuckles his goatee, smiles) Riff Rotten, our lead singer, used to say it was bad luck to bring women aboard, sort of like the old sailing ship superstition. Too distracting, etc. Then again, sailors also believed naked women ‘calmed the sea,’ so…(laughs) We’ve had plenty aboard in our heyday, clothed or otherwise! But no, it’s not always a constant party – this is our home and our office while we are on the road, and we have to sleep some time!

RBtW: Can you share some tour bus ‘rules’ with us? Dos and Don’ts?

RBtW: Ewww! So what do you do?

DG: Well, that leads to rule number two: If you get off the bus at a rest stop, make sure you leave your backstage laminated pass on the driver’s seat.

DG: If it’s 2am and the driver’s made a pit stop, he has no idea who’s still sleeping in the bunks and who got out to grab food, a smoke…or to use the ‘loo. If you leave your band laminate on the seat, he will know you’re still out there when he gets back on. I can’t tell you how many times our bassist Sam got left behind in some podunk town and we’ve had to turn around and go back for him.

RBtW: How about a third and final rule to share with our readers?

DG: Do not pass out in the common areas up front, or the back lounge. If you do, be warned: you are fair game. I didn’t make it back to my bunk on one particularly wild evening and woke up with obscenities Sharpied across my forehead. It wasn’t pretty!

RBtW: (giggling) When it comes to choosing your bunk on the bus?

DG: Right…I prefer top. (winks) Our drummer leaves his stinky shoes strewn about in the aisles so I like to be as far away from them as possible!

RBtW: Can you show us your bunk?

DG: Sure. This bus sleeps twelve…don’t look behind that curtain, luv - that’s Sam’s. He always leaves his dirty unmentionables lying about. Here’s mine – not much to speak of.  Some photos of my girlfriend Kat, oh and her daughter Abbey likes to draw pictures for me to hang up while I’m away. And we all have our own TVs, a nice perk when you are rolling for miles in a bed roughly the diameter of a coffin!

RBtW: Has any famous Corroded Corpse history been made on the bus?

DG: Simone’s Song, our biggest hit, was written at 3am in the back lounge of a bus like this one, some twenty-odd years ago. That was a “make AND break” sort of history for the band. But that’s a story for another day…

RBtW: Last question, we promise: Can you tell us what that tattoo means?

DG: What, the misericorde? (slowly unbuttons his shirt to reveal a thin dagger running down the middle of his chest) My lips are sealed, ladies. Riff has an identical one, so perhaps he’ll kiss and tell. But you’ll have to find him first… 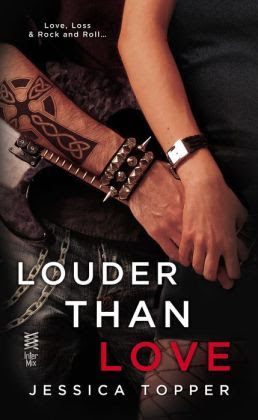 
In this powerful debut novel, a young librarian grieves the loss of her husband...and discovers a love that defies classification.
It's been over three years since a train accident made a widow of Katrina Lewis, sending her and her young daughter Abbey back to the suburban town of her youth...the only place that still makes sense. Lauder Lake is the perfect place to hide and heal.
Recluse rocker Adrian "Digger" Graves survived the implosion of his music career, but his muse has long lain dormant. Until Kat hires him to play at her library—not on the basis of his hard rock credentials but rather, because of the obscure kids' TV jingle he wrote years ago. In a case of mistaken identity, Adrian stumbles into the lives of Kat and her comically lovable daughter.
Using tattoos as a timeline, Adrian unfurls his life for Kat. But as the courtship intensifies, it's unclear whose past looms larger: the widow's or the rocker's. Will their demons ever rest, or will they break these soul mates apart?

She can trace her love for the written word back to age three, when she memorized Maurice Sendak’s Chicken Soup with Rice in its entirety.After her daughter was born in 2001, Jessica left the Manhattan library world and began working for her husband’s music management company. He offered her a part-time bookkeeping job so she could “stay home for the baby’s first year” and pursue her dream of writing.The baby is now eleven years old, and Jessica has been working her “full-time, sold-her-soul-for-rock-n-roll job” as Office Manager for veteran jam band moe. in their Buffalo, NY headquarters. She may have traded in books for bookkeeping, but the printed word is never far from her mind, or her heart.LOUDER THAN LOVE, her debut women’s fiction effort, is set to release September 17, 2013 through Berkley/Intermix (Penguin).
Jessica is a member of the Western New York Romance Writers and a PAN member of the Romance Writers of America. http://jesstopper.com/


(Guitar for display purposes only and not included!) ;) To enter, just fill out the rafflecopter below! (Open to US residents only.)