Today we are happy to be a part of Mary Hughes cover reveal for BEAUTY BITES. 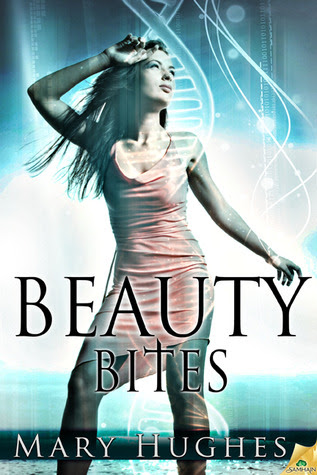 
Beauty is skin deep…but the beast goes all the way.
When top Minneapolis ad man Ric Holiday is asked to design a campaign for a quaint little town, his first reaction is absolutely not. Meiers Corners is too near Chicago, home of the vampire who turned him as an orphaned boy.
Then the city sends an angel-faced med student with a body made for sin to plead their case. Synnove Byornsson is the ray of sunshine Ric hasn’t felt since he was human.
Armed with determination and a micro miniskirt, Synnove is prepared to crash Holiday’s penthouse cocktail party—and to dislike him on sight. But Mr. All-Style-No-Substance turns out to have a deadly smile, a barely restrained, feral strength, and piercing blue eyes that look at her—not at her cleavage.
Unfortunately Synnove has competition in the form of a sly temptress with a counterproposal. For the first time in her life, Synnove must cash in her genetic lottery ticket and fire back with some sizzle of her own—or her beloved Meiers Corners could become the new Sin City.
Warning: Contains a doctor with a bod for sin, an ad exec with a chip on his shoulder, sarcasm, sex, and a cabin full of annoying friends. Secrets are revealed. One heart-stopping, horrific moment leads to the ultimate of happily-ever-afters.


Excerpt
It was all fun and games until the gun hit my skull.

Thud. A bright pain cracked in my brain, telling me the mountainous hostage-taker had brought his own weapon to bear.

Almost immediately something heavy plowed into us, spinning me away from the gun. I staggered to a stop.

My sight cleared to Ric, wrestling the mountain.

The big goon seized Ric with one arm, hugging him close like he was going to give him noogies. But the gun in his noogie hand made reality more chilling.

Ric shimmered, and suddenly the mountain was holding a cloud of mist.

Vampire fighting technique? I cheered before it occurred to me to wonder why Ric hadn’t used it before and why the shadowman helping us hadn’t used it at all.

The edge of Ric’s mist caught a stray beam of sunlight. It instantly combusted—poof. My elation turned to horror.

Ric snapped back into being like a rubber band. His cheek was seared open, exposing red muscle surrounded by blackened, bubbling skin. But he lost no time raising his bound hands, swinging, and whacked the bad guy’s head with fists like a mallet.

The mountain swayed but didn’t go down. Ric spun, once, twice, winding up his whole body behind it, and whacked him again.

Still the guy didn’t go down. My heart tripped double time. The mountain swept his gun toward Ric.

I leaped at them. Went oof when I hit the shadow’s arm, stuck out like a bar. I folded over it like a cheap towel and staggered back.

Ric slid into the rifle.

The mountainous goon opened fire as Ric knocked the gun to the side—the side where the ogre-like head hostage-taker stood.

Ogre Face ducked and covered. A spray of bullets rat-a-tat-tatted a line where his head had been.

Ric chopped his forearms across the mountain’s right wrist. The mountain howled, both arms flying up in defense, right hand dangling with a protruding lump at the wrist presenting as broken. The gun fell to hang from its clip. The mountain groped for it with his left hand.

The guy shrieked. Ric wrenched. The mountain dropped, curling on the floor like a shrimp. Apparently Ric also had a grip like a nut crusher.

I whipped around. Ogre Face pointed his gun at my head. He rasped, “You’re dead.”

Terror burned that instant into my head like a snapshot. I stood facing the ogre. About ten feet separated us. Behind me was the hostage-lined bank of windows, the shadowman already running toward them. A few feet to my right, the mountain goon curled on the floor, Ric breathing deeply over him.

Both Ric and I were too far away to stop the ogre from shooting.

“Down!” The shadowman pushed hostages to the floor, starting with the ones in Ogre Face’s direct line of fire. Well, if you didn’t count me.

My knees started to bend.

Ric wouldn’t hit him in time, even though he’d leaped before the ogre pulled the trigger.

The gun went off.

Ric Holiday in his full sizzling glory was right on top of me.

I stepped back, spine hitting the edge of the elevator shaft. My nipples reached out as if trying to stay in touch. *The erection of the mammary papilla is due to muscle contraction, like the pilomotor reflex which causes goose bumps*—Stupid nipples. “What do you want?” I spoke a bit sharply, but his heat and heady scent had goosed my frustration into borderline rudeness. I flushed but held my place. Well, fused against the corner of the shaft, I had to.

He stared down into my eyes, his own frustrated too. “I want to explain.”

“You made it clear enough. Me and Camille at the O.K. Corral, one week from today.” I looked away. The elevator was leaving.

“Synnove.” He slid two strong fingers under my chin and urged my face back to him. The blue had softened. “I’m sorry.”

“Why? There’s worse?” I scowled, but I had to work at it. Why did he have to be so gorgeous? Why did his fingers have to be so gentle, so warm? “You’re going to make us bikini mud wrestle?”

“Ouch.” He smiled slightly. “I deserve that.”

And I was beginning to see the advantages of hot sexy sizzle. But no way I was admitting that to him. Not lying, just omission, which is not a lie. Mostly.
When my lips parted to say something that was not a lie and definitely wasn’t about how sexy he was, his eyes darkened. “Shh.”

He replaced the two fingers on my chin with two cupping hands, holding my face gently, like it was something precious. Like I was precious.

My lips stayed parted but no words came out.

In that moment of silence, he lowered his head. Slowly, so I could have stopped him.

Should have stopped him.

Did not want to.

He’s nothing but image.

Argh. Shut up and kiss him.

While I was arguing with myself his warm mouth settled on mine, tongue sliding deftly between my lips. It rasped my sensitive skin, rubbing my lips awake like a thorough toweling. A steamed towel, hot and wet.

He swept inside, all spice and heat. He groaned, a sound of masculine hunger. His questing mouth, his hot kiss, said lust plain and clear. Yet his hands were tender on my face, his sweet caress speaking of something beyond sex, a closeness that transcended the physical.

Happiness blossomed in my heart. Our groans were intertwined, mutual. For this one moment, the battle was suspended and we were on the same side.
His fingers tunneled into my hair, holding me firmly while his tongue drove deeper. He pressed closer yet, pinning me to the edge of the elevator shaft with his body, imprinting me with every muscle, every bulge, every place he was hard and primitive under his worsted.

I rippled against him and moaned softly in response. If he could generate this kind of pressure standing, how would the weight of his body feel, pressing me into a mattress?

At the thought I nearly exploded.

He shifted me, his powerful hands urging me away from where the corner of the elevator was digging into my spine and guiding me onto the wall. There he pressed me into vinyl wallpaper and kissed me like he was starving for me. The honest hunger in his kiss undid me. I grabbed his head and kissed him back with everything I had.

A big hand slid up my ribs, sparking a trail of heat, stopping under my breast. The mound throbbed, waiting, wanting, yearning for that hot hand to slide up the curve, to touch my delicate and private flesh. To brand it as his own. My soft moans shortened to whimpers, and I arched to thrust my breast more fully into his hand.

A deep rumbling started, a lion’s purr. His hand moved, fingers barely brushing the bottom curve. I stopped breathing. His fingers skimmed higher, circling nearer, nearer to the hardening tip. I twitched in anticipation, greedy for his touch on sensitive flesh barely covered by a thin blouse and the wispiest scallop of lace. Bless Twyla’s endless supply of sexy bras.

Finally, finally his thumb scraped my nipple. I shrieked into his mouth, jerking against him. My nipple furled instantly, wordlessly urging him again, more, now.

He opened his hand and covered my breast, his heat searing. Slotting the nipple between two fingers, he began to pump and tug gently, rhythmically squeezing, pulling. I thought I’d go insane from the sweet soft tugging.

Until he replaced the hand with his mouth.

His lips closed on my erect nipple through thin blouse and bra, breath wetting the material until he could have been sucking directly on flesh. It was the dream become real; it was better. More aroused than I’d been in my life, I grabbed his ears and beat my hips into him, not thinking at all, just moving. A pressure built between my legs, a hot, heavy throbbing that made me want him on his back and me naked and clamping him between my thighs.

A ding startled me; my eyes flew open. The elevator, which had gone and come back again, disgorged half a dozen professional-looking people.

Grand Prize (Tour-Wide)
Mary will give away winner's choice of one of her backlist.  Winner will be selected by Rafflecopter.