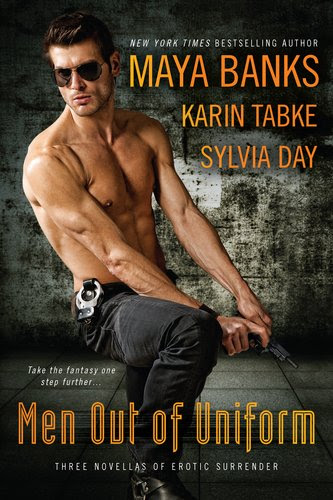 The hottest thing about a man in uniform is imagining him out of it...They may enforce the rules, but when men in uniform are off duty and under the covers, they're experts at breaking them. In this searingly sexy anthology, popular authors Maya Banks, Sylvia Day, and Karin Tabke present men in uniform--unzipped...In Maya Banks's Soul Possession, Jessie spends a hot night with two sexy-as-sin detectives, only to be accused of murder the very next day. But when Jessie becomes the target of a serial killer, her two detectives will risk everything to have her back in their arms--and in their bed...
It's time for protected witness Layla Creed to come out of hiding and take the stand in Taking the Heat by Sylvia Day. Layla has only three days to reconnect with federal marshal Brian Simmons--and slake the white-hot lust that has simmered between them for years...
Karin Tabke's Wanted follows the X-rated exploits of bad-boy cop Colin Daniels and the soon-to-be-ex-wife of a mob boss. He's been hired to guard her body, but it drives him to distraction instead, putting his career--and his life--on the line...


Soul Possession by Maya Banks
Maya Banks starts this anthology off with a bang, throwing you right into the burning fires of passion. Two detectives and best friends, Rick and Truitt, frequent a bar where the meet pretty waitress Jessie Callahan. Both men want her, so instead of fighting over her and potentially ruining their friendship they decide to go after her together. Finally convincing her to join them in a ménage a trios Rick and Truitt bring Jessie home for a night to remember, only afterwards they want more than just one night. But when they find out the next morning that Jessie is a prime murder suspect can they believe that she is innocent, or did she just use them as an alibi?


Soul Possession was hot hot hot, but the relationship aspect of the story was a bit unbelievable to me. These two alpha men want Jessie for themselves, are each possessive of her, but decide that they can share her with each other.  The sharing just didn’t jive with their characters and I didn’t see how a happy future was possible for the three of them together. The suspense was interesting, with a few twists thrown in, but due to the novella length maybe, I didn’t feel that it reached its full potential. At least, what I’ve come to expect from Maya Banks. Overall though, Rick and Truit were sexy as all get out and it was still a good little read that had me fired up for the rest of the anthology.


Wanted by Karin Tabke
Bad-boy cop and ladies man, Colin Daniels, is sent to guard a high profile criminal’s soon-to-be ex-wife, Sophia Gilletti, and bring her out of hiding and to New York to testify against him. He has 24 hours to deliver her to his superiors before he’s a wanted man himself. When Colin comes face-to-face with Sophia though, after rescuing her from a hit man, she seems a little too familiar. Can this be the same girl that disappeared with his heart over a decade ago? Danger follows the pair on their journey but it doesn’t stop the desire that still burns strong between them.


This was my first taste of Karin Tabke’s work, though I have read her series under Karin Harlow, and wow - am I craving some more now! Despite being only a little over 100 pages, Wanted was overflowing with romance, action and suspense. I really enjoyed this pair reuniting and getting to delve into each of their characters. Both have some tragedy and insecurities to deal with but they bring the best out in each other, not to mention their sizzling attraction and how Colin is smokin' hot!   *fans self* A great read!


Taking the Heat by Sylvia Day
This was my favorite story out of the anthology! Layla Creed has been in witness protection, given a whole new life and identify for the murders she witnessed, but it is time to come out of hiding and take the stand against the man who killed her friend and protector. Federal Marshal Brian Simmons fills in for the assignment and walks into a disaster when he goes to pick Layla up. The man Layla is set to testify against does not want her making it to California and will do anything to stop her but Brian will put his life on the line before he lets anything happen to the woman he loved and let walk away five years ago.


I absolutely loved this story of second chances! Taking the Heat was filled with danger, excitement and raw passion. The chemistry between Layla and Brian was intense, bursting through the pages, and the sex scenes out of this world. The reconnecting of this pair tugged on my heart strings as they worked out their misunderstandings and insecurities over their past relationship, hoping to build a solid foundation for a new one in just three days. With a full and vivid plot, relatable and sex-ay characters and a humorous and naughty dialogue - this was one story that I did not want to end!


A super sexy anthology by three awesome, must-read authors about strong, feisty women determined to get those spectacularly sexy men out of their uniforms and into their beds for good!