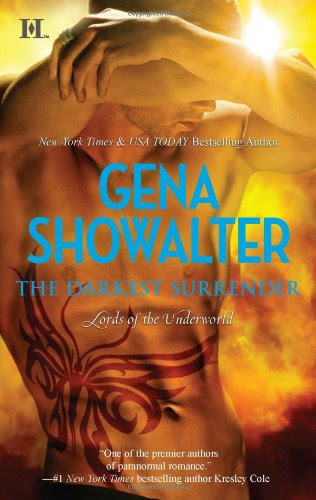 
Possessed by the demon of Defeat, Strider cannot lose a challenge without suffering unimaginable pain. For him, nothing stands in the way of victory. Until Kaia, an enchanting Harpy, tempts him to the razor's edge of surrender. Known among her people as The Disappointment, Kaia must bring home the gold in the Harpy Games or die. Strider is a distraction she can't afford because he has an agenda of his own-steal first prize, an ancient godly artifact, before the winner can be named. But as the competition heats up, only one prize will matter-the love neither had thought possible...


My Thoughts:
How Gena Showalter works such magic between the pages, I have no idea, but I hope that she never stops! The Lords of the Underworld series just keeps getting better and better with each installment and The Darkest Surrender is easily one of the best books in the series so far!

The Lords are on the hunt for the last two artifacts that can open Pandora’s Box and destroy them if held in the wrong hangs. Strider, the keeper of the demon Defeat, gave one artifact up for what he thought was safe-keeping, only to be betrayed. Now he is on a mission to make it up to his friends and Win by finding the remaining pieces, but a stubborn harpy keeps getting in his way.
Kaia knows that Strider is her consort, her one and only soul mate, but trying to convince Strider of that is proving to be a difficult job. After being rejected by him several times already, Kaia is on the verge of giving up when she is summoned with her sisters to participate in the Harpy Games. A consort’s blood is the only way to heal quickly from these dangerous games; can Kaia get Strider to agree to be her consort at least temporarily?
When Strider finds out that first prize is one of the artifacts that they have been searching for he agrees to participate in the Harpy Games with Kaia, but he won’t risk her loosing it and the rod. Planning to take matters into his own hands, Strider bides his time. But when it comes down to it, will he risk everything, even love, to Win?


Gena Showalter tears you from this world and into hers within the first few pages of The Darkest Surrender, giving readers a succulent tale full of action, tension and sizzling romance with a witty and humorous repartee.
I LOVED LOVED LOVED Kaia and Strider together; these two are hands down one of my favorite couples. Kaia was such an easy heroine to get behind; smart, strong, spunky and determined. Though she projects an air of confidence, inside Kaia is really quite insecure, believing that she is a disappointment to everyone she cares about. I enjoyed the witty banter between her, Strider and Kaia’s family and the Harpy’s shenanigans was down-right hilarious.
Strider, well he was just sexy as all get out! Even though I don’t usually go for the blond heroes, I knew several books ago from his attitude that I would love Strider and I’ve been itching for Gena to hurry up and get to him. LoL His character was scintillating and sarcastic, and I died (in a good way) over his ‘ego checks’ as well as his references to Stridey Monster, OMG! *fans self* Strider is Kaia’s consort which he doesn’t fully understand at first. He’s attracted to the feisty little Harpy, no doubt, but believes Kaia will continuously challenge him and his demon causing him to lose and end up in unbearable pain which just isn’t going to happen. Despite that however, Strider risks himself to help Kaia out, shows her her worth while protecting his friends as the same time. He is strong, loyal and pure alpha male. *growl* Him and Kaia are a perfect fit and I couldn’t be happier with the way Gena wrote them together, absolute perfection!


William, Kane and Paris show up, adding excitement to the numerous subplots and expanding the LOTU world. Gena gives readers several peeks into Kane’s head (who carries the demon of Disaster) and I am very much intrigued. Paris has had a difficult time these past few novels and my heart wrenches for his current circumstances but Gena is setting it up nicely for his book next (The Darkest Seduction 02/21/2012). Which will also carry over a suspenseful cliffhanger with Kane and William stranded in Hell and the end of the world hanging in the balance; talk about your nail-biter!
Another amazingly awesome addition to the Lords of the Underworld series and an awe-inspiring bookish delight to Gena Showalter’s long list of fantastic reads!

Sexual content: Expect exactly what you love from Gena Showalter! Burning sexual tension and scorching sex scenes intended for adult readers! *whew* Have a cold shower ready for when this hot Lord/Demon and Harpy/Phoenix get together!
Posted by Crystal @ RBtWBC at 10/19/2011 12:52:00 AM