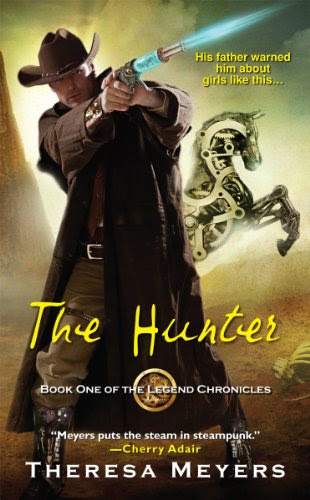 They're the Chosen—Winchester, Remington and Colt—brothers trained to hunt down supernatural beings using the latest steam-powered gadgetry. It's a hard legacy to shoulder, and it's about to get a lot more dangerous. . .A Devil Of A JobColt Jackson has gotten his name on many a wanted poster with success in the family business: hunting supernaturals across the frontier. Lately, though, there's a sulfur stink in the wind and the Darkin population is exploding. A rift in the worlds is appearing. To close it, Colt will have to do the unthinkable and work with a demon to pass arcane boundaries no human alone can cross.Except when he summons his demon, he doesn't get some horned monstrosity: he gets a curvy redheaded succubus named Lilly, who's willing to make a bargain to become human again. He also gets Lilly's secret expertise on the machinations on the dark side of the rift. And her charm and cleverness help to get them out of what his silver-loaded pistol and mechanical horse can't. Of course, when all hell breaks loose, he might have to sacrifice his soul. But what's adventure without a little risk?

GoodReads
My Thoughts:
A dash of the old west, a sprinkle of steampunk and dollop of the supernatural makes for a unique new paranormal romance with The Hunter.


Colt Jackson is a Hunter born and bred; though his parents tried to protect him from the family legacy, when a demon attacks him as a boy his father trains him to take down any and all of the Darkin.  Now the only active Hunter of the Jackon’s, Colt is searching for the missing pieces of an ancient book, one he knows his Pa had. The Darkin are growing in numbers and the only way to keep them from escaping the gate is putting all three pieces together and closing the gate for good. But he needs a demon to help him and when he goes to summon one what he gets is a seductive succubus who wants to be human and who will test all the rules he has as a Hunter.
The Hunter was a good Indian Jones-isque adventure full of action and danger with a slow-building romance between Colt and Lily that felt real and believable. I loved how author Theresa Meyers mixed steam punk elements such as weapons and gadgetry into the paranormal while giving it an old western setting; all of these little facets where perfectly blended and balanced with each other.


The Jackson brothers (Winchester, Remington and Colt), along with their inventor friend Marley Turlock, were incredibly intriguing and well-rounded characters that came to life on the pages. Colt is a sexy cowboy Hunter, named after the gun, with a Stetson, boots, duster and all.  His romance with Lily, the Succubus, builds unhurriedly with a good amount of sensual tension. Colt experiences some internal struggle over the fact that he is a Hunter and Lily is a demon and that just doesn’t mix, along with trust issues with her but he eventually comes to see the woman beneath the succubus in between treasure hunting and fighting off rock demons, hellhounds, mechanical scorpions and a sadistic archdemon named Rathe. Lily’s character on the other hand, was a bit of a contradiction. One of my issues was she would play the sultry succubus on one page and then the next she was a demure miss trying to act the proper lady. It didn’t quite jive and I ended up unable to really connect with her. The world building though was superbly creative and well-detailed and I could easily place myself right on Tempus, the clockworks horse, riding through the dessert and cacti or even up the rugged mountain trails in search of a hidden mine.
However, this story moved slowly for me and took twice as long as normal for me to finish. I can’t put my finger on exactly what the problem was, maybe it was just a stressful week for me, because I did enjoy the book and look forward to the rest of the series, but I hope the next books have more speed to them. All in all, The Hunter was a good read and a great little dip into the world of steampunk if you’re new to this genre while it was still exciting to those who make forays into it often.

Sexual Content: For adults with plenty of teasing, suggestions and innuendos. A tastefully written sex scene that doesn't get too graphic but still appeals to romance lovers. Something to steam up the windows with.
Posted by Crystal @ RBtWBC at 10/28/2011 12:51:00 AM