4.5 Wine Glass #Review of Edge of Truth by Brynn Kelly 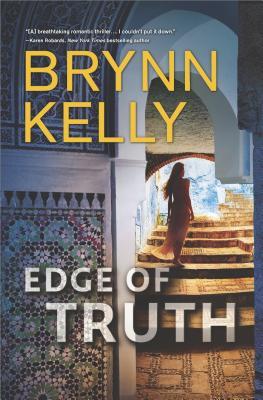 Tensions sizzle in this electrifying novel guaranteed to capture your heart and take your breath away. Fans of Julie Garwood, Suzanne Brockmann and Jayne Ann Krentz will devour this action-packed, emotionally stunning tour de force, where every page reveals another damning secret and daring gamble.

Rotting in an African dungeon is the last place journalist Tess Newell expected to find herself. As she's held hostage by the terrorist group she's investigating, Tess's salvation--and temptation--arrives in the form of another prisoner. A French Foreign Legionnaire with a sinful smile and too many secrets to be anything but dangerous. Yet she knows he's her only hope of surviving.

The Legion is the only family Flynn has. His sanctuary and his purgatory, after years spent in hell. When a mission goes south and Flynn is captured, it's not the enemy that worries him, but the brazen, alluring reporter whose prying questions threaten to bring down his world--and the walls he's built around his heart.

Yet after a daring escape, Flynn must risk it all and go on the run with Tess to retrieve the evidence she needs. The chemistry between them threatens to detonate but, with the enemy fast closing in, time is running out to unravel the truth from the lies in this deadly conspiracy...


Linda's Thoughts:
Gunfire cracked around them.
“Just warning shots,” he yelled.
“How do you know?”
“We’re not dead.”

Edge of Truth by Brynn Kelly was hands-down a must-read for me after I absolutely inhaled Brynn’s debut romantic thriller, Deception Island, last year. I was not disappointed. It doesn’t feel like it when you’re reading it, but the entire story takes place over just two days! It’s extremely fast-paced with lots of deadly action and was intense to the nth degree. The primary players are Tess Newell, a female investigative journalist, and Flynn, a French Foreign Legionnaire.

As the story opens, readers meet Tess who was being held in brutal and squalid conditions by terrorists in Ethiopia. She was targeted and kidnapped by the terrorists because she was prepared to break a whale of an expose on the terrorists and their collusion with some crooked politicians. Shortly after, we meet Flynn as he joins her in their hole-in-the-ground dungeon. Flynn’s an Australian with a past that he wanted to forget. That’s why he joined the French Foreign Legion where he could be anonymous forevermore. Injured, tortured and beaten, their horrendous situation facilitates an alliance of sorts between them. The combination of extreme stress, constant danger and the chemistry between them then quickly evolves their connection into a fiery insta-love.

I really liked both the hero and the heroine. Flynn was hot and sexy and Tess’ character was beyond approach. They both had serious trust issues. Even though they came from different backgrounds, they had much in common which made their attraction more plausible. Flynn’s without question a bona fide hero with a veritable talent for getting out of extraordinarily dangerous situations. Their sexy, touching and funny banter was perfect and much appreciated as it provided some much-needed relief from the relentless tension.

Some of what transpires, I had issues envisioning without multiple miracles. But, hey, this is fiction and it makes for a great story. If I had one complaint, it’s that I craved some downtime between the high-stress scenes which just kept relentlessly coming….

Supporting characters included Flynn’s Legionnaire cohorts who came to assist Flynn and Tess. They each had stories to tell too.

Following please find a few of my favorite quotes from Edge of Truth:

“Can you hyperventilate a little quieter?” he whispered.
---

“You promised me a kiss,” she whispered.
“A rash comment in the heat of the moment.” His face was so close she could feel electricity snapping between them.
“I think I’m still feeling that heat.”
She tilted her hips. He groaned. It was enough. His mouth captured hers.
---

“Read it to me.”
“Seriously?” he said quietly. “You want me to read you poetry? Like saving your life ten times wasn’t enough?”
---

He shushed her, laughing. “I’d like to be that spider, if that woman was you.”

Edge of Truth was non-stop, breathtaking and mind-boggling set against a corrupt conspiracy. The story was brutal, fierce and felt realistic. If you enjoy suspenseful edge-of-your-seat all-too-real thrillers with life-changing and likely life-ending consequences, buckle your seat belt tightly and dive into Edge of Truth.