Fa la la la la, la la la la
Happy Holidays everyone! Is everyone excited that Christmas is only a few days away or are we glad to get it over with? LoL I don't look forward to taking all the decorations down and packing them back up for next year. Yuck. Or taking all these toys hidden under the tree out of their package. I mean, do they really need to tie everything down the way they do? Do they really think that someone is going to walk out the door with a 3 foot Barbie house unnoticed? I wish that I had a magic wand sometimes, that would be handy wouldn't it?

The man candy that I have for this lovely Monday is a beefcake and a Christmas card in one, I hope you enjoy it!

Quote of the Week:

"A book is the only place in which you can examine a fragile thought without breaking it, or explore an explosive idea without fear it will go off in your face. It is one of the few havens remaining where a man's (ahem, or woman's) mind can get both provocation and privacy."
Edward P. Morgan 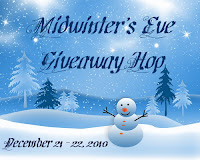 Tonight starts the two-day Midwinter's Eve Giveaway hop, I will list my post at 10pm so make sure to check back for that! If you would like to see all the other blogs that joined in the giveaway hop visit I Am A Reader, Not A Writer. I will have a giveaway for
one book (winners choice) from My Top 12 Favorite Books of 2010.

(Gena) So many times I've been asked if I plan to write Paris’s story – and when. Well, there's been a new development.
Paris's book WILL follow Strider's. (At first, I thought it would be Kane, but nope, it's PARIS!) His book, tentatively titled The Darkest Seduction, will come out in 2012.
I hope this news excites you as much as it excites me! The story just kind of came together (I always try to think about my next book to write as I'm finishing up another and yes, I'm finishing up Dark Taste of Rapture) and, after talking to my editor, knew this was the right way to go.

Bones was also dressed as though entertainment were his only motivation. His long sleeved top was made entirely of black mesh, his crystal skin exposed more than it was covered with the material. Leather pants hung low on his hips, tight enough to hint at his assets, but with enough give that they wouldn’t hinder his movements. The all-black ensemble combined with his dark hair only made his pale skin even more striking by comparison, drawing the eye to the muscled flesh those hundreds of tiny holes revealed.
He caught my lingering gaze where the peep show of his skin ended and the front of his pants began – and flashed me a wicked grin.
“Hold that thought, luv. With luck, we’ll be back in our hotel room breaking in the Jacuzzi before dawn.”
If I’d have still been human, I might have blushed. Logic said I should be past the stage where it was obvious that I was mentally stripping and molesting my own husband. We weren’t in the earliest bloom of our relationship anymore, after all. But when Bones approached, his dark eyes glittering with hints of green, gooseflesh still rippled across my skin as though this were a first date. Then everything in me tensed with expectation when he stood as close as possible without touching, only his breath hitting my skin as he spoke near my ear.
“Have I told you how lovely you look tonight?”
A wave of heat rolled over my subconscious, like my nerve endings had just been brushed with the warmest of caresses. My hands slowly fisted while I resisted the urge to touch him, enjoying the building tension between us. Yes, this was different than the first giddy stage of attraction I’d felt for him, but that didn’t diminish his effect on me. Instead, the desire I felt was richer, stronger, and far more intoxicating when combined with the hold Bones had over my heart.
His scent deepened, that blend of burnt sugar and musk tantalizing me with the evidence that he felt the same way I did.  His comment about the Jacuzzi tub made some explicit images dance in my mind. Like how devastating Bones would look wearing nothing but suds – and then nothing but my body.
Another thought teased its way into my mind. Why wait? The backseat of our car is only a few feet away…
“You know, in addition to your mindreading abilities, I may have absorbed some sluttiness from your blood,” I said, giving my head a little shake. Had to be. I normally wouldn’t think of getting it on in a parking lot when we had a reporter to snag inside and two undead friends just a few dozen feet away.
Soft laughter tickled my neck while the invisible caress of his aura intensified. “Be still my non-beating heart.”

I hope that everyone has a wonderful week full of holiday cheer and as always, Happy Reading!