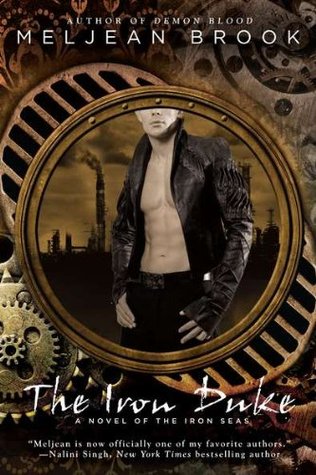 After the Iron Duke freed England from Horde control, he instantly became a national hero. Now Rhys Trahaearn has built a merchant empire on the power — and fear — of his name. And when a dead body is dropped from an airship onto his doorstep, bringing Detective Inspector Mina Wentworth into his dangerous world, he intends to make her his next possession.Mina can’t afford his interest, however. Horde blood runs through her veins, and despite the nanotech enhancing her body, she barely scratches out a living in London society. Becoming Rhys’s lover would destroy both her career and her family, yet the investigation prevents her from avoiding him…and the Iron Duke’s ruthless pursuit makes him difficult to resist.But when Mina uncovers the victim’s identity, she stumbles upon a conspiracy that threatens the lives of everyone in England. To save them, Mina and Rhys must race across zombie-infested wastelands and treacherous oceans — and Mina discovers the danger is not only to her countrymen as she finds herself tempted to give up everything to the Iron Duke.

Steampunk seems to be taking the blogosphere by storm and I will admit that I was instantly intrigued by all the hype. I had no idea what to expect with my first foray into the steampunk world but to say that I absolutely LOVED this novel would even be a gross understatement. I was totally enthralled by The Iron Duke and it is my favorite novel of 2010 hands down.  I don’t think I can do it justice with a review but here’s my take…

For almost two hundred years the Horde controlled Britain’s population and many other countries around the world. Using nanoagents, or ‘bugs’, hidden and sugar and tea they infected the people and were able to control their actions and emotions through powerful towers. (I kinda imagined LOTR here, LoL)
Nine years ago the pirate Captain Rhys Trahaearn on his ship, Marco’s Terror, took out the London tower, freeing Londoners from the Horde’s control.
After the Horde’s defeat the King bestowed the title of Duke of Anglesey onto Rhys and enlisted Marco’s Terror into their naval force. Also known as The Iron Duke, Rhys has had to quit his pirating ways and now holds vast shipping interests and is a hero to Londoners and beyond.

Detective Inspector Lady Mina Wentworth is one of the original entitled gentry, though impoverished. She was conceived during a Horde imposed Frenzie, where her mother was raped by a Horde member, and her features resemble her paternal side. Because of the resemblance to the despised & still feared Horde Mina is constantly abused, mentally & physically, and ridiculed just by walking down the street. Despite the prejudice of the public though Mina has a loving and supportive family & friends and is dedicated to her job.

When a body is dropped onto the Iron Duke’s house Mina is sent by her superiors to investigate. Rhys is reluctant to let outsiders onto his estate and in his business but decides to see how he can use the Inspector. But he is immediately captivated by Mina’s quick whit and can’t seem to understand his instant attraction to her. Where as Mina does feel a spark for the larger-then-life Iron Duke, but is put off by his reputation and public status. But Rhys is a man who always gets what he wants and he is determined to possess Mina as his own and is soon cutting away at her stubborn resolve.
Then Marco’s Terror is captured with Mina’s younger brother Andrew onboard and it is immediately personal to both of them. They must work together to find the culprit behind the highjacking but in seeking the truth they discover a dangerous weapon that uses Horde technology and a conspiracy that could destroy ‘buggers’ worldwide.
Their adventure takes them into passionate waters on the high seas and through the air with fantastical pirates, creepy zombies, frightening sea monsters and intriguing steampunkery gadgets.

The Iron Duke is one hell of a ride with its deep characters and the complex, captivating & succulent world that is built around them. You’ll be thinking about it days after reading it, I assure you. The Iron Seas is vast world full of new ideas that are both imaginative and creative.
Mina is a strong and smart heroine who is loyal and loving in a world that reviles her. She can also hold her own against Rhys who is an aggressive and confident hero with a strong sense of justice. Rhys is honorable and absolutely delicious with his gold rings piercing the top of each ear. You won’t be able to get enough of this ‘reformed’ pirate. Him and Mina’s relationship is incredibly passionate but not your typical romance. There are some very steamy scenes and a lot of them are dark & intense. I will give you fair warning; if you read this in public you might find yourself blushing like crazy like I did while in the waiting area of my daughter’s dance center! Wowza!
The suspense and action will keep you on the edge of your seat and the twists will have you holding your breath. Everything about this book is amazing.
And the secondary characters are so vivid and real, you’ll want to know more about every one of them. (Lord Scarsdale, Lady Corsair, Achimedes Fox and even The Blacksmith.)

The Iron Duke is smart, sexy, dangerous and absolutely thrilling. And did I mention how HOT Rhys is? Or how HOT Rhys and Mina are together?
HOT HOT HOT HOT HOT
It is so evil that I have to wait a whole year for the next Iron Seas novel to come out, Heart of Steel. *insertpouthere*
Oh, and a little side note because I know some readers had a hard time understanding the world in this book at first, look up the definition to steampunk before reading if you don’t already know it.
But seriously, if you haven’t read this book yet go out and get it, like right now. Yes, you sitting there reading this. Get off that fanny and into the book store, or if you have an ereader go ahead and stay on that fanny and download the ebook right now! You won’t be disappointed. I'm off to find more steampunk reads now that The Iron Duke has so thoroughly whetted my appetite for it.