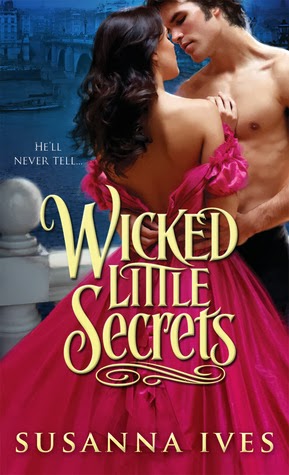 It's Not Easy Being Good...
Vivacious Vivienne Taylor has finally won her family's approval by getting engaged to the wealthy and upright John Vandergrift. But when threatened by a vicious blackmail scheme, it is to her childhood friend that Vivienne turns; the deliciously wicked Viscount Dashiell.
When Being Wicked is so Much More Exciting...
Lord Dashiell promised himself long ago that his friendship with Vivienne would be the one relationship with a woman that he wouldn't ruin. He agrees to help her just to keep the little hothead safe, but soon finds that Vivienne has grown up to be very, very dangerous to all of Dash's best intentions.

Wicked Little Secrets is a wickedly fun historical romance you will not want to put down. Ives throws in humor and mystery to compliment this sweet romance between childhood neighbors.
Dashiell is a well traveled rouge. He inadvertently spread his love of relics to his young impressionable neighbor, Vivienne. She wears a scarab around her neck and a burning desire for Dashiell in her heart. So when trouble comes knocking on her aunts door in the form of a strange man in a blue coat, Vivienne turns to the man who in her eyes goes looking for trouble, Dashiell.

Dashiell and Vivienne end up in some interesting situations, some that will have you laughing. Particularly whenever Dashiell’s grandfather appears. The old Lord Baswiche and his group of friends are perfect secondary characters! There to lend a hand or be a nusiance. Though when Vivienne begins to unearth the source behind her aunts distress and the letters delivered by the blue coat laughter is far from her mind. With pieces and clues, black mail and old lovers, Ives leads you down a twisting road. And what an interesting twist she delivers at the end!

Wicked Little Secrets is a well written historical romance. Dashiell and Vivienne traverse a bumpy and windy road, but after some nudging from Baswiche and others end up happy.