Lexi: Christmas is the time to share some wine and surround yourself with loved ones. It can be a particullarly difficult time for those who have lost someone close or those who must spend the holiday alone. That is three things most of us are blessed to have. Unfortunately for our hero in A Vampire’s Christmas Carol, Ben has none of that. Unless he had wine and we just didn’t see it. In your opinion what was the worst thing Ben had to deal with?


Crystal: LOL I missed the wine too if he had it! I wasn't sure what to think of Ben at the beginning, but Cynthia Eden put a wonderful spin on this lonely vampire's tale. I think that the worst thing that Ben had to deal with though was the guilt over loosing Simone. Not only did he loose the one woman he loved, and the only person he cared about in life, but he felt responsible for her death as well and carried that with him throughout the last ten years.

Crystal L: Ben was a lonely guy. He'd lost the love of his life, his human life, and he had no hope. My heart seriously hurt for him. All of those issues made me want to root for his HEA from the very beginning.


Lexi: Cynthia Eden’s vampires are easy to spot. Her writing of the fanged blood suckers is always a treat. But she wrapped up A Vampire’s Christmas Carol in red and white with this one by bringing us the classic Christmas tale. We even get a demon named Marley! I for one have always loved this Christmas story so I enjoyed Eden’s vampiric twist. The three ghosts really sucker punched Ben, no wonder he was on the verge of going crazy. How about you? Did you like this version of a Christmas Carol?


Crystal: I love Cynthia Eden's vampires! A Vampire's Christmas Carol was definitely an entertaining spin on Charles Dickens' classic tale. Though obviously Ben wasn't a childhood fan because by the third ghost he was still clueless as to what was going on! lol

Crystal L: I loved Eden's twist on the Christmas Carol. This is also one of my favorite Christmas stories, so to see someone put such a delightful paranormal twist on it made my day. I think it was masterfully re-invented in Eden's vision.

Lexi: Ben and Simone were two great characters, ready to bleed for one another. But it was the demon William Marley who stole the show for me. A demon whose shirt doesn’t burn up in the fire that frequently surrounds him? And what was he doing fighting three shifters in a cemetery?! Who was your favorite paranormal Christmas Carol character?


Crystal: I liked the demon, William's, humor and attitude a lot. I don't think the story would have been the same without him. Though I enjoyed each of the characters immensely, even the street urchin, Cale. I wonder what will happen to him, a human in a paranormal world...

Crystal L: Simone was my favorite. For me, she was the epitome of stand by your man. She sacrificed so much for Ben, and the possibilty for the to have a second chance. I loved her. Marley was a close second for me though. Hot demon guy with super cool tricks? I'M SOLD. I'm really hoping we see a story for him in the future.

Lexi: While this release wasn’t a five star gotta have it for me, I still loved having a Christmas themed story to read. Nothing can put you in the mood for wrapping presents like reading about fangs sinking into a neck! *thinking* Well maybe there are some others out there, but this was still fun. And you get a HEA! Overall thoughts from you ladies?


Crystal: Though I agree that this story didn't blow me away like many of Cynthia Eden's past books, I found a Vampire's Christmas Carol to be a heartfelt, whimsical tale and a solid four stars. And I really like that despite it's novella length, it was a full and satisfying story!

Crystal L: I seem to love all of Cynthia Eden's books. This one was no different for me. There's just something about her writing that I feel like I'm walking around in the story with the characters. And speaking of characters, she always writes seriously interesting ones. Marley is a great example of that. This was a solid 4.5 star book for me personally.

Lexi: This was our last Wine Club posting for 2013. So lets pop the bubbly and toast to a good year! Now, *rubs hands together in glee* lets see what books 2014 will bring us.

Crystal: *Looks up from stack of pillows and half dressed men* I'll have to expand my harem for 2014, things are getting a bit tight in here as it is. On second thought, *looks left and right* I don't mind the close quarters. *winks* Bring on 2014! Bones, be a dear and pass me a glass...

Crystal L: Rock on to 2014! I'm hoping for lots of new book boyfriends and books that make me want to do happy dances that make the hubs think I've lost my ever loving mind. HEE. 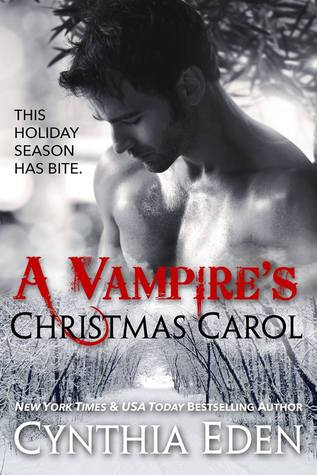 This holiday season has bite.

Ben Prescott hates Christmas—he’s a vampire, and to him, there’s certainly nothing jolly about the holiday season. While the humans are running around being merry, he’s hunting in the shadows. Ben plans to spend the holidays his way…by stalking deadly prey.

But fate has other plans for Ben.

Three visitors are coming Ben’s way…A demon who will force Ben to face his past, a ghost who will show Ben the present he could have, and a shifter who will reveal the darkness that waits in Ben’s future. Unless Ben can change his ways, he may just turn into a real monster, one who can’t be saved by anyone or anything.

’Tis the season…to be undead.

Ben’s redemption rests in the hands of the one woman he loved and lost—Simone Laurent. If Ben is going to have a chance at being more than just the beast in the darkness, he has to prove himself to the lovely Simone. A very hard task, considering that, once upon a Christmas Eve, Simone died in Ben’s arms…

Warning: This book features one very tortured vampire, a sexy ghost from his past, and hot scenes designed to melt the winter snow. Plenty of action, adult situations, and steamy times are ahead. Happy holidays!