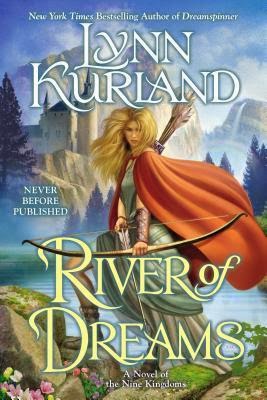 Aisling of Bruadair is frantic to find both the truth about her future and a mercenary to save her country. When an offer of aid comes from an unexpected direction, she is relieved her quest is almost complete. But she soon realizes her task is far from over . . . and will include perils she never dreamed she would ever face.
Rùnach of Ceangail has offered to help Aisling with her quest, then he fully intends to take up his life as a simple swordsman far from magic and evil mages. Unfortunately, a chance finding of a book of indecipherable spells tells him that an ordinary life is never going to be his--especially when he realizes that the book he has in his hands belongs to a black mage who will stop at nothing to have it back.
With time running out, Rùnach and Aisling must solve what seem to be unrelated mysteries before others find those answers first and plunge the Nine Kingdoms into a darkness it will never recover from . . .

With a writing voice capable of weaving new worlds around you, Lynn Kurland brings you along on a journey of self discovery and unfurling romance in River of Dreams.
Kurland’s series has a beautiful balance of fantasy and romance. Her worlds are full of three dimensional characters, each bringing a quirky personality and depth to the story. From Uachdaran and Iteach to the witchwoman of Fas, they touch the lives of the main characters yet leave you feeling as if they have a full story of their own.

River of Dreams continues on from Dreamspinner. Aisling and Rùnach are traveling towards her quest to find a knight to fight for her homeland. Along the way are chased by Rùnach’s bothersome relatives and need to seek haven at his Grandfather’s home. Aisling is continually astounded at the creatures she had believed belonged in fairy tales, especially when she is warmly welcomed by the elven King and Queen.

Aisling and Rùnach have a deadline but to reach her destination they must evade his brothers. They give death the slip, meet a dwarf King and Bruadaiar royalty. The puzzle that will be scratching at your brain is who or what is Aisling. Nearly everyone they encounter sees something in her, some power that Rùnach can’t. Make it to the end and you will be relieved of the mystery, at least in part.

River of Dreams is a thoroughly enjoyable fantasy with a nice dash of romance that grows throughout the book. The banter between Aisling and Rùnach is flavored with his humor, making you smile frequently. Unfortunately we need to wait a year for the next one. More time to reread the first seven books!