Review: His Very Own Girl by Carrie Lofty 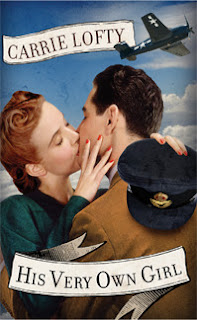 From the author of Flawless and Starlight comes an emotional, sensual romance set during World War II about a female British civilian pilot and the American paratrooper medic who opens her heart—only available as an eBook.
After the War took the lives of Lulu Davies’s parents and her fiancé, she promised herself she would guard her heart carefully and concentrate on her great love—flying the biggest and best airplanes in the sky. Lulu is a pilot in the British civilian air force, ferrying planes around Great Britain and keeping her eye on a coveted spot in a training program for world-class pilots. She’s perfectly content to strive for greatness in the skies, and dance with a few GIs on the way.
Brawny, quiet American medic Joe Weber signed up with the paratroopers to escape his checkered past; he’s hoping that jumping out of planes and patching up soldiers will earn him respect and a hopeful future. Joe’s first real test of medical skill is on a pilot whose plane takes a hard landing in a training field; after rushing to the crash scene, he is stunned to come face-to-face with a gorgeous Rita Hayworth lookalike. And when the two cross paths at a dance hall a couple weeks later, he can’t resist the urge to find out more about this spirited, dark-haired beauty.
Their flirtation breaks all of Lulu’s rules, but dance by dance, week by week, walk by walk, she finds herself falling in love with this honest, vulnerable man on the run from his demons. But as Lulu and Joe’s undeniable attraction gains momentum, World War II steadily intensifies toward D-Day. The lovers only have one night together before Joe is transported to France for the Battle of the Bulge, where his skills and his instinct for survival will be pushed to their limits. Lulu distracts herself with flight school and the friendships of her colleagues, but she can’t get the handsome medic out of her head. Only time and hope will tell if her love will return unharmed from War, and if the two will be able to overcome their pasts to form a beautiful life together in peace-time.

Goodreads
Purchase at Amazon and Barnes & Noble
Lexi's Thoughts:
Lofty has brought WWII to life with His Very Own Girl. Incredibly well written this book will take you back and make you feel like you are living it. This only cements Carrie Lofty’s place as a must read author.
His Very Own Girl brings together Lulu and Joe, two people who will not give their hearts away because of past hurts and regrets. They meet in a horrifying fashion, and maybe because of it the connection that forms between them is even stronger. They run into each other time and time again, they dance, they flirt, they hurt each other. Even when they give in and try to open up the war creates a wedge between them. A medic and a pilot, an American and a Brit, but above all a man and his girl.

Reading His Very Own Girl, WWII feels very real. From the air raid sirens and the adrenaline that comes with the aftermath, to the inability to acquire basic items like stockings. Then there is the emotional torment of saying goodbye to a loved one, not knowing if you will ever see them again. The good and the bad, the sweet and the angry making you wish you could replay a conversation or erase the words said. Every day wondering where they are and if they are alright, imagining the worst and hoping for the best.
Lofty has written another wonderful historical romance, but this time in a new era bringing with it an element of reality not seen before in her books. If you enjoy historical romances or books about WWII do not miss this.