(Re-Post) Welcome to the second half of Day 4 in Highlander Week!
The fantastic author Catherine Bybee of the MacCoinnich Time Travel Trilogy allowed me to interview one of her characters from her latest, and final, novel in the trilogy - Redeeming Vows. 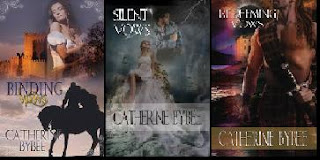 Crystal: Hi Lizzy! Thanks for taking time away from your family to hop back to the 21st century for an interview!
Lizzy: Thanks for having me here, Crystal.
Crystal: Did you ever believe time travel was possible before your sister, Tara, disappeared?
Lizzy: If someone had told me time travel was possible before Tara disappeared, I’d have encouraged them to find a good shrink. C’mon! But after months of searching for Tara and coming up with nothing…
Crystal: What does it feel like, jumping from one time to another?
Lizzy: Good question. Think of every science fiction wormhole you’ve seen on TV, with the different colors swirling all around you and the sound of a tornado crushing in… that’s how it sounds and how it looks, but how it feels... Gravity sucks you down, or up, or whatever the hell it’s doing, before dumping you into a different time. I get a little nauseous just thinking about it. Tara passed out when she jumped through time. Then again, she didn’t know what was happening. I at least knew I was defying every law ever preached by my teachers when I was in school.
Crystal: What’s the coolest thing about your druid powers?
Lizzy: I guess that would depend. The most useful thing is being able to start a fire with a flick of my fingers. In the 21st century that wouldn’t do a whole lot of good unless I camped a lot. Which I didn’t. But that same energy helps me charge electronics. Yeah, I know what you’re thinking…’What kind of electronics do you have in the 16th century?’ – Duah, those I’ve brought with me from the 21st. There’s nothing like an I Pod and a little rock and roll to kill some of the hours here.
My coolest gift, however, is one I can’t really talk about. Sorry, but Catherine doesn’t want to spoil my story before you’ve had a chance to read it. I will say this, “It’s Wicked!”
Crystal: What are three cons and three pros about living in the 16th century?
Lizzy:
No Toilet
No Toilet
No Toilet
Followed close by:
No Shower
No Shower
No Shower
Okay, I’ll be serious… maybe. Besides, I have Fin working on a bathroom for me. I told him I didn’t give a rats ass that he’d have to explain to anyone who saw it where the water came from or where the ‘waste’ went. I want some hot running water and a place to pee indoors that doesn’t stink!
Okay, so… three cons – Working bathroom. That really has to be #1. Followed by junk food. What I wouldn’t give for a bag of Hershey kisses or, gasp, pizza. The people here think tomatoes are poisonous. Crazy that! The third con is probably more concerning than any. People here really do fight to the death. No metaphoric anything. I’m not so worried about me, but my son, Simon, he loves it here. There’s no way I’ll convince him to go back to our time. The thought of him sticking a broadsword into someone, or god forbid, someone doing the same to him… It makes me sick just thinking about it.

Okay, Three pros – I’m in the best shape ever! And the men! Holy cow, batman. They are all so kilt-a-licious. I’m partial to Fin, but I have eyes and Scotland grows her men big. All their macho BS keeps them in great shape. No middle age bulge or spare tire from watching too much TV on the weekends. Another pro is family. Not just the MacCoinnichs, either. It’s like everyone is one big family all working to make things good for each other. It isn’t about who has the biggest TV or the nicest car.
The other big pro for me is Fin, the big lug. Don’t tell him I told you this, but living without him isn’t an option for me. Besides, he needs me to keep him in line.
Crystal: Can you name one thing about Fin that makes your knees weak and one thing that drives you crazy?
Lizzy: Let’s start with the crazy. Cuz, darlin’ he makes me friggin nuts at times. He thinks he knows everything! His ‘I’m the man you need to listen to me crap’ is so over the top I need to zap him (literally) to remind him who he’s talking to. His ego… boy, he saw the cover for Redeeming Vows, pointed at it and said... “See there, lass, I’m the one people are going to buy the book for.” I had to remind him that he’s the eye-candy for the cover, but the women want to know how I adjusted to his time. The big jerk. But he does look good on the cover, don’t ya think?

Okay, the weak knees part. Just between you and me… The harder we fight, the better the sex. Lord that man can kiss and what he does with his tongue… Oh, never mind. Let’s just say that all those muscles that keep me safe have an amazing way of holding onto me. Fin make me feel like I’m the most special thing in the world. In this century, men will die for their women, but Fin… he’d take on a whole army to defend me, and honey, that’s so friggin’ hot! Don’t tell him I said that or he’d be impossible to live with. It’s much better if he doesn’t know everything going on inside my head.
Crystal: Fin is definitely hot! LoL But I totally understand. Thank you again, Lizzy, for stopping bye!
~*GIVEAWAY*~
Catherine is giving away one digital copy of her newest Highlander release and the last novel in her time travel trilogy, Redeeming Vows.

To enter, just leave a comment answering this question:
What would one con and one pro be for you, living in the 16th century?
Make sure to leave an email address with your comment.
Giveaway ends at 11:59pm on May 21st, open Internationally.