🍷🍷 #Review of The Bewildered Bride by Vanessa Riley 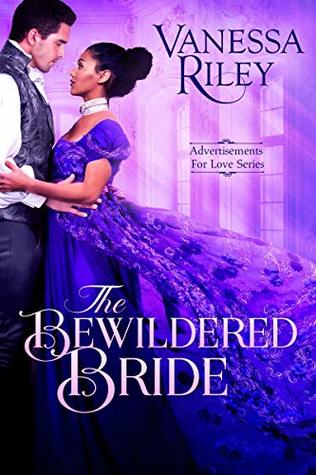 Ruth Croome, a Blackamoor heiress, was supposed to get married in a gorgeous wedding gown, made from her father’s exquisite fabrics. Instead, they eloped to Gretna Green and upon returning, their carriage was beset by highwaymen and she witnessed the murder of her new husband. Now, four years later, with a child, she wants to move on with her life. A marriage of convenience will do. Ruth already had a love for the ages.

Adam Wilky is really the heir to the Wycliff barony—which he never told Ruth. Too much danger. So many secrets. When he was nearly beaten to death and sold into impressment, he thought Ruth had died, too. Ready for revenge, he finally returns and discovers Ruth alive—with a son who could only be his—and she is furious to discover he lied to her. Now it’ll take more than remembered passion if he hopes to win his reluctant wife back...


Kimberly's Thoughts:
Adam and I had been kicked out, were running for our lives, and the morning sun hadn’t even risen.

Ruth and Adam had a whirlwind romance that had them going to Gretna Green to get married. Adam hasn't been completely honest about who is and plots involving his uncle  stealing money that have him in danger, so before they can fully enjoy their happily ever after, evil snatches it away.

Fourth in the Advertisements in Love series, The Bewildered Bride gets the story rolling right away, almost too quickly for me. I haven't read the others in the series and for the first twenty or so percent I felt like I was missing some background or key information. There is some lying by omission going on from Adam and he isn't completely honest about how much danger his uncle is, leaving Ruth in the dark in a way that completely hamstrings her. I felt even more lost than Ruth with the plot about Adam's evil uncle, I'm wondering if there was some information about this in the previous book or if Adam and Ruth's relationship starts there, as they're getting married when we first start the book. The middle was a still a bit muddled for me but towards the end, the author untangled everything to make things clearer.

“I have to believe the good in him. He did not take me to Gretna Green just to have at me. We married. I was a bride. I was loved.”

The star of the show was definitely our heroine Ruth. Since no one in her family ever met Adam, they don't believe she was married, making her family having to rescue her from a brothel and then delivering a baby nine months later, a dark mark on her reputation. Ruth's mother and sister don't believe her story about marrying Adam either, letting their friends say hurtful things to Ruth. I felt for her and her pain was palpable on the pages, it was just the construction of the story plot that I couldn't completely get on board with.

On their way back from Gretna Green, they are attacked by men possibly sent by Adam's uncle and it ends up where Adam thinks Ruth is dead and Ruth thinks Adam is dead. Ruth doesn't have any proof that she was married to Adam and Adam has a tough road to travel before he can get back to being in control of his own life again. This is a great set-up for some drama but when our hero and heroine meet back up again, Ruth doesn't recognize Adam (the first time because she doesn't have her glasses on). Adam proclaims some weak excuse for not telling her and for the vast majority of the story, we have Adam lying to Ruth again and some unreliability that she can't recognize him. I just didn't feel the romance between the two.

Ruth was a strong and heartbreaking character with all she had to deal with, while I felt like I couldn't connect with Adam and his lying. The evil uncle plot was a bit hard to follow but the author did a great job of portraying the emotional and historical feel of the times; classism and racism. I could have missed some information starting with book four, if you're a reader of the series you'll definitely want to read this for Ruth and if you're starting here, be prepared to maybe be as bewildered as Ruth.