2.5 Wine Glass #Review of The Scoundrel in Her Bed by Lorraine Heath 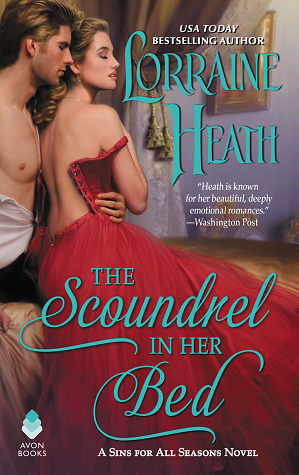 The bastard son of a nobleman, Finn Trewlove was a shameful secret raised by a stranger. As Finn came of age, he had secrets, too—the clandestine nights spent with an earl's daughter. But her promise of forever ended in betrayal.

Driven by a past that haunts her, Lady Lavinia Kent seeks redemption in London's underworld, engaged in a daring cause inspired by the young man to whom she gave her innocence, and who then proved himself a scoundrel by abandoning her.

When their paths cross again, they can't deny the yearning and desire that still burns. As they discover the truth behind the deceptions that tore them apart, Finn and Lavinia must fight to reclaim what they've lost, no matter how dangerous—because love is worth the risk...

Third in the Sins for All Seasons series following the Trewlove siblings, Finn falls for an Earl's daughter. As the Trewlove siblings, except for the youngest, were all born on the wrong side of the blanket and “farmed” out (in this case, delivered by aristocrats or their servants, with a one time payment to Ettie Trewlove to take care of or dispose of baby as she saw fit), this proves dangerous for Finn and Lady Lavinia Kent, as she starts to fall for him, too.

The first half of the book had flashback scenes that went back and forth with the current events happening. These flashbacks did a pretty good job of delivering the how and why of Finn and Lavinia's relationship but as Lavinia starts off as fifteen to Finn's early twenties, some of their deeper emotional connection wasn't there for me. There was more of a feel of kid giddiness, especially from Lavinia, of doing something forbidden than actual deeper love. The misunderstanding that initially keeps them in tension is talked about and for the most part resolved in the first half. The second half is fully in the current time and we get Finn still expressing his feelings for Lavinia and Lavinia still working through the pain of their past.

“There’s no pleasure in taking what isn’t freely given.” He grinned wolfishly. “Doesn’t mean I won’t test you to see where the boundaries are.”

Finn was my favorite part of this story, he was sweet, sensitive, and conscientious. I did think that even though he was supposed to be the same age as his brothers, he felt much younger, he had more of a tender naivety feel; this could have been done to make his romance with a late teens heroine feel more natural. While I liked Finn, I struggled at times with Lavinia. She lives the very sheltered and confined life of an aristocrat daughter and after escaping some horrors her mother and father inflict on her, she decides to make it her mission to save farmed out babies. However, it felt like she blindly and naively, rich-woman-striding-in-thinks-she-knows-the-best-way-to-solve-the-problem by stepping in to buy the children and put them in nun run homes. She doesn't bother to really see if what she is doing is better for the children; Ettie Trewlove more than likely ended up being a far better situation for Finn to grow up in than being dumped at a very full nun orphanage. Lavinia never really lost her, what I think is best is, feel and her drawn out, felt a bit pointless at times, “we've changed so we can't be together” whole second half of book with Finn.

Their breathing was shallow, fraught with tension, as they each took a measure of the other.

While this started off intriguing with the from the different side of the tracks relationship, not a lot really happens, the second half felt like a bunch of forced overly melancholy we can't be together and when there were emotional moments, they felt rushed and didn't quite leave an impact. The elements for a good story were here but the spark and emotion to immerse you were not. Heath's writing is good but this felt like a going through the motions, there was some repetitiveness and I think this could have been better as a novella. There are still other Trewlove siblings to get their stories and as Heath has wrote an intriguing family, I'll still be on the lookout for future installments.


Suggested Reading Order:
Book #1 Beyond Scandal and Desire
Book #2 When a Duke Loves a Woman
Book #3 The Scoundrel in Her Bed
Book #4 The Duchess in His Bed - August 27, 2019