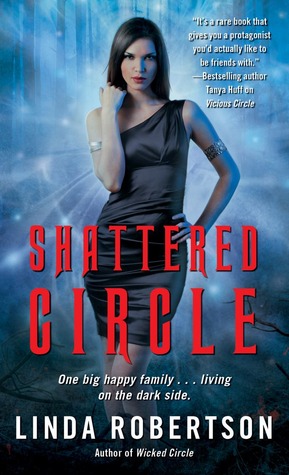 
After her werewolf boyfriend, Johnny, tried to kill her, Persephone Alcmedi finds herself in the comforting arms of powerful vampire Menessos. She’s trying to sort out her feelings for the two men, but not even Seph is above the confusion of tangled emotions. All Johnny wants to do is mend their relationship and reveal the life-altering news he’s recently received, but his new responsibilities as the werewolf king take up most of his time.
Does this mean Menessos can finally make his move?
Meanwhile, unknown to Seph, her beloved foster daughter, Beverley, has been playing with a magical artifact and making dubious friends on the other side. When Beverley disappears, Seph must seek help from a supernatural being so potent that even Menessos fears him...and such aid always comes with a very steep price.

Goodreads
Available for purchase at: Amazon, Kindle, Barnes & Noble, and the Book Depository

Linda Robertson left us hanging, wondering if Johnny would be able to reconcile with Seph and if Menessos would be able to handle loosing his haven and take care of the threat of the three sisters? Shattered Circle delivers...most of the answers along with providing an interesting twist for Seph. What, did you really think Robertson would tidy it all up and hand it to us in a pretty bow? Nah, the Persephone Alcmedi series is gritty, emotional, and surprising. Just the way we like it.

Johnny, oh Johnny you have your hands full now. Still unable to remove himself from the position of the Domn Lup he is being pressured from those on the inside and outside, and now he has a secret to keep from his pack. All of this roller-coaster life stuff happening, and Seph is afraid of him and wont talk to him.

Then the worst thing happens to Seph, something dark and creepy gets its hands on her. She can’t get out alone and needs help, Johnny might be able to become her night in shining armor...

Book six takes a step in a different direction. Don’t worry, it is still a good direction. Though in this book you have less (much less) interaction between the trio of Seph, Menessos, and Johnny. They each are dealing with their own problems, and Seph’s is possibly the most threatening. Things are never going to be the same for these three. Especially after you learn who has Seph!

Did I say Robertson left us hanging with questions before? Well now she really has with this new factor in the equation. Not cliff hangers, but plenty of “I can’t wait to see what happens next!”.