About a year and a half ago, I went on a lovely writers’ retreat with my dear friends Maya Banks and Karin Tabke. We rented a quaint little home in Sonoma, CA. The moment we stepped into the house, we were faced with panoramic views. The entire living room and dining room were surrounded by walls of floor to ceiling windows. The setting was picturesque, with a beautifully landscaped garden and rolling green hills beyond that.

The first words out of my mouth? “Uh... where are the curtains?”
Both Karin and Maya shot me odd looks. “What the hell do you need curtains for when you have a view like that?”
“Well,” I said, “when it gets dark, we’re not going to be able to see outside, but everyone will be able to look in.”
“Who’s everyone? There’s nobody out here.”
I concede, they had a point. There was nothing but garden and hills outside the window. No homes, cars, or people. Truth be told, that’s part of what freaked me out. I’m an urbanite--miles of nothing is scary as hell to me. “A serial killer could be out there,” I replied.
My dear friends scoffed at me. Later, when it got dark, I freaked out. They were fine. But then again, out of the three bedrooms in the house, mine was the only one without curtains. Oh, great, I thought. The mass murderer can follow me to my room when I leave the crazy-assed living room with the ginormous curtain-less windows.
Over the next couple days, I tried to explain the correlation between staying out in the boonies and serial killers. “They go hand and hand,” I argued.” And with wide-open windows, they can track our every nocturnal movement.”
Sadly, as much as I love my friends, they just didn’t get it.
And then, late one morning, I was sitting in the living room with Maya when I heard the unmistakable heavy tread of a serial killer on the front deck. Yes, it was morning, but the mass murderer had already had a couple nights to scope us out after dark--through those massive, uncovered windows. Now he was closing in for the kill.
“Did you hear that?” I whispered to Maya.
“Hear what?”
“Bootsteps. On the front deck.”
“Sweet Jesus,” she muttered, with a look that accused me of being crazy. Then she froze. Her eyes widened. Because she heard them, too.
Karin, making coffee in the kitchen, was oblivious. The doorbell rang. And she--a cop’s wife, no less!--glides gracefully toward the door.
Now, we’ve all seen this in scary movies, right? Unsuspecting victim opens the door and *bam* She’s dead. I look at Maya in horror. Maya looks at me the same way.
“What the hell are you doing?” I hiss at Karin.
She glances over into the living room. “Getting the door.”
“Are you insane?” I ask her. “There’s a serial killer out there!”
With an impatient sigh, she goes back into the kitchen and looks out the window, which faces the driveway. “It’s just the cable guy, Syl.”
Maya, who knows as I do, whispers fiercely, “It’s always the cable guy!”
Dawning understanding (tempered by exasperation) swept over Karin’s face. She backed away from the window.
We’re in a rental property, after all. There should be no cable guy or electric guy or any guy coming around while the house is being rented. That’s what the property management team is for. They’ve said nothing about maintenance occurring during our stay.
We waited him out. Maya had her Blackberry in hand. I was eyeing the fireplace poker. We could take him if it came to that. Fortunately for him, it didn’t. He wised up and left.
Later that night, Karin--now wizened to the error of her ways--checked her bedroom windows (the same bedroom windows she’d been sleeping under for days) and realized that while she had curtains, her windows didn’t have locks. Vehement cursing accompanied her search for something to wedge the windows closed with.
Ha! I thought, triumphant. I was right (of course) and now they were listening to me.
The next morning, Karin tells me and Maya about the horrible nightmare she had after she managed to secure the windows and fall asleep.
“What happened?” Maya and I ask. “Did the serial killer get you?”
Yes, he did. He tied her up in a chair and made her watch as he strangled, stabbed, and eviscerated me and Maya. It was heinous.
Maya’s brow went up. My lips pursed. We glanced at each other. Then asked, “What’d he do to you?”
“Oh.” She shuddered delicately. “Nothing. He just made me watch.” 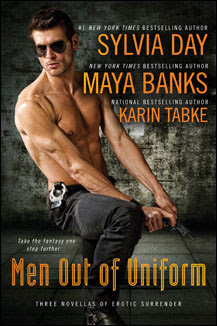 Maya and I decided that was the last time we’d warn her about a serial killer at the door.
But aside from educating my friends about the hazards of roughing it in picturesque homes in the wine country, something else came out of that trip to the wilds of Sonoma, CA--MEN OUT OF UNIFORM. It was during that trip that we decided to write the anthology and spend part of the advance for it on our next writing retreat: A week on Catalina Island, in a hillside condo surrounded by other hillside condos, where it would be impossible to miss hearing screams. Safe. Secure. With massive windows showcasing panoramic views of the ocean... and fully-functional window blinds.
Find out more about Sylvia and Men Out of Uniform on her website at: http://www.sylviaday.com/ Also be sure to check out her upcoming paranormal romance A Touch of Crimson!
~*GIVEAWAY*~
Sylvia is offering one copy of her upcoming release Men Out Of Uniform, shipped directly from her publisher, to one lucky reader. (I am so jealous!!!) Open to US & Canadian residents only. To enter just leave a comment on this post and fill out the rafflecopter below!