Blog Tour: How to Seduce a Scoundrel by Vicky Dreiling (Guest Post & Giveaway)

Today we have the lovely Vicky Dreiling visiting on her blog tour with a guest post and giveaway!
What's in a name? 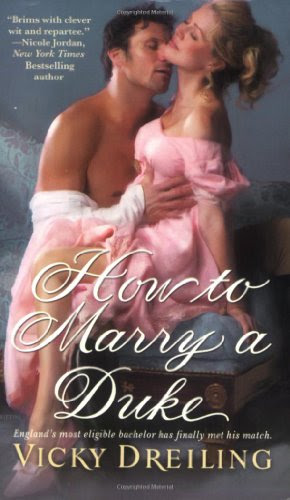 This is really a fun topic for me because there is a story behind the names of my characters. When I first set out to write my debut novel HOW TO MARRY A DUKE (January 2011), I asked my friend Kristi to assist me. I had one big requirement for the names of my soon-to-be hero and heroine: alliteration. In my mind, this made the starring characters seem more like a couple.
My friend Kristi said, “OK, no problem.”
She made that statement, not realizing that I am particularly picky about names. We spent hours on the phone discussing possible names. I am so picky that Tessa was the only name that appealed to me out of thousands in baby name books and websites. Mind you, Tessa would have been an unusual name back in the Regency era, but names like Susan, Marianne, and Catherine didn’t excite me.
So we were left with names that started with a “t” for the hero. I turned my nose up at Thomas and Tobias. Those names were entirely too plain for me. I wanted a manly name with pizzazz. My friend got so frustrated with me that she said, “His name is Tristan and you’re not changing it.” Well, I’d really liked Tristan and Isolde, so I tried out the names on my tongue. “Tristan and Tessa.” The alliteration sounded catchy to me. I knew then that I had the perfect set of names for my hero and heroine.
Now I was ready to start writing the book. Since I was writing a story with the high concept of The Bachelor in Regency England, this meant I had to name numerous characters. Frankly, after the exhausting experience of finding a name for my starring couple, I just stuck names on these characters without a great deal of thought. For example, I just called Tristan’s best friend “Hawk” because it popped into my head. I’d seen it as a nickname before in historical romances, so I intended to change his name. My critique partners at the time, however, grew incensed. How dare I try to change his name? He was Hawk, and they said I couldn’t change it. Well, I didn’t want to incur their wrath, so he retained the name. Alsok, I had to make a slight change to another name to avoid confusion. Originally, Georgette was Georgianne. But Tristan’s sister was Julianne. Since that might have confused readers, I made the change. Then I named the shy girl Amy because she was a little plain compared to the other young ladies, so I wanted my timid redhead to have a pretty name. J

One name had a very deliberate connotation, and that was the villain, Richard Mortland. I chose to name him after Shakespeare’s evil Richard III. His last name is also significant. The French word for death is “mort.” In HOW TO MARRY A DUKE, Richard Mortland was presumed dead, but comes back to England. He metaphorically rises from the dead, and his reappearance in Tessa’s life after so many years represents death to her life as she knows it.
In historical romances with lords and ladies, authors have to invent not only last names, but title names as well. Generally, I look at name sites online or I just make them up. I confess all these names can make me a bit weary, but once the work is done, I can focus on the plot and characterization. No matter what I name my characters, they tend to take on a life of their own. That’s where the fun really begins.
Thanks so much for inviting me to guest blog. May the Magic Romance Fairies be with you!
Vicky Dreiling
www.vickydreiling.com Facebook Twitter Goodreads
~*GIVEAWAY*~
Thanks to the publisher I have three copies of How to Seduce a Scoundrel to giveaway! You can read an Excerpt here!
Giveaway guidelines:
-Only residents of the U.S. or Canada are eligible to win
-No P.O. Boxes, please.
-Giveaway copies will be sent directly from publisher.
-Give ends July 28th
To enter, just fill out the form below!
Posted by Crystal @ RBtWBC at 7/14/2011 06:30:00 AM