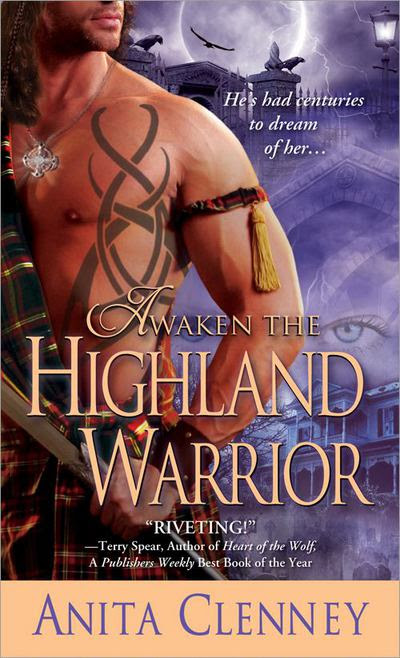 A man from another time...     Faelan is from an ancient clan of Scottish Highland warriors, charged with shielding humanity from demonic forces. Betrayed and locked in a time vault, he has been sleeping for nearly two centuries when spunky historian Bree Kirkland inadvertently wakes him. She's more fearsome than the demon trying to kill him, and if he's not careful, she'll uncover the secrets his clan has bled and died to protect...                                                                       Could be the treasure she's been seeking all her life...When Bree inherits an old treasure map, she discovers a warrior buried in her backyard. But the warrior isn't dead. Bree shocks Faelan with her modern dress and her boldness, and he infuriates Bree every time he tries to protect her.With demons suddenly on the move, Bree discovers that Faelan's duty as protector is in his blood, and that her part in this fight was destined before she was born. But nothing is ever what it seems...

GoodReads
My Thoughts:
Awaken the Highlander is a breathtaking story where there are no coincidences, only destiny.
The great Faelan Connor was one of Michael’s fiercest Scottish warriors over a century ago, but after he was betrayed and locked in a time vault by an evil demon he was assigned to eliminate, no one heard from him again…until Bree Kirkland inadvertently releases him while searching for lost treasure.
When Faelan awakes to the twenty first century, much has changed, including the way women dress and act. Not know who is working for the demon Druan or how to navigate in this new world, Faelan must depend on Bree.
Each distrusting the other, expecting the worse, begin an intricate dance of suspicion and desire , but when an old enemy reveals itself they must put their doubts aside and work together to save mankind from the fires of Hell.
Awaken the Highlander is the first novel in Anita Clenney’s new Connor Clan series and what an incredible start! Highlanders, demons, angels and even vampires kept me glued to the pages of this spellbinding tale. The story follows the ancient warrior Faelan Connor and the treasure hunting, Bree Kirkland. Together they are an explosive couple with sizzling chemistry, but their relationship is rife with distrust, secrets and misconceptions that turned into an emotional roller coaster for characters and reader alike. However, their deep passion leads to scorching tension and steamy romance, which proceeds to a few sigh worthy love scenes. Bree, a female version of Indian Jones, with the same drive, stubbornness and sense of dry, sarcastic humor, was an engaging leading lady. While Faelan, the hot-kilted warrior, has everything I seek in an alpha hero. Bursting with honor, protectiveness, possessiveness and fierce in battle with a deep sense of justice and loyalty *sigh* Wouldn’t it be nice to find him in your backyard? I loved the back and forth dialogue between these two, Faelan trying to protect Bree but Bree is a 21st century independent woman and will not sit by while Faelan fights. There was also plenty of humor with Faelan trying to figure out this time; how some things have changed and some haven’t.
I was bombarded with questions throughout this novel though and by the end I was left with plenty unanswered, hopefully in the second novel though some of them will be. It did keep me on the edge of my seat, turning the pages, to find out what was happening. There were also numerous new characters and roles introduced in a very short time span, which got a wee bit confusing at times but I loved every moment! Incredibly shocking twists and turns that kept me guessing and had me turning the pages faster and faster. The author really took her time weaving a sensational tale masterfully. Plenty of intense suspense, action and battle scenes to keep adrenaline junkies entertained; with a unique, fast paced plot that is in depth and well development. All the characters introduced were rich and I easily became invested in each.
Awaken the Highlander was a great start to a new series and I cannot wait for the rest, especially since seeing the blurb for the third novel and all I have to say is *squee* I just knew it! The ending left a cliffhanger but not a frustrating one; it’s a good set up for secondary characters becoming future lead characters.
An awesome read for highlander and paranormal romance fans!