Today I have the immense pleasure of interviewing author Sara Creasy!

Hi Sara! Thank you so much for joining us today at Reading Between the Wines!
Can you start off by telling us a little bit about yourself?

I live in Melbourne, Australia, but I’ve been a continent-hopper over the years. I was born in the UK and grew up in Birmingham. My dad moved the family to Australia when I was 13. Then when I got married a few years ago to an American, I moved to Arizona. Last year we had a baby and decided to raise her close to her Aussie cousins – so we moved back to Melbourne.
I was always writing when I was younger but never imagined I would be published. After my degree I did a few different things and ended up in the publishing industry, editing high school text books, so I got to interact with a lot of authors. That helped demystify the publishing process for me, and eventually I started writing my first novel and more importantly started believing I could write something worthwhile and publishable. Song of Scarabaeus was my first completed novel. I went through the usual submissions process to get an agent, and Kristin Nelson found me in her slush pile. She sold the book to Diana Gill at Eos (Harper Voyager) and it came out in 2010.
You currently have two science fiction releases, Song of Scarabaeus that came out last year and it's just released sequel, Children of Scarabaeus; can you please tell us about them?

The Scarabaeus series is a far-future science fiction adventure story. Edie is a cypherteck, a highly trained computer whiz who uses biological technology called biocyph to terraform planets for the Crib (the bureaucratic/military body that governs much of the galaxy). In Song of Scarabaeus she’s kidnapped by rovers (space pirates) and forced to return to the planet Scarabaeus, which her team had attempted to terraform years earlier. Things went horribly wrong, as they do, and now she has to figure out why. The rovers “leash” her to an unwilling bodyguard Finn, an ex-rebel fighter and convict and all-round rather sexy dude, and if he strays from her side he dies.

In Children of Scarabaeus, Edie and Finn are attempting to get to the impoverished Fringe worlds, to bring them much-needed help, but along the way they’re recaptured by the Crib. Edie is blackmailed into joining a team of child cyphertecks working on a new and improved method of terraforming – a method that Edie is convinced will lead to mass ecological destruction across the galaxy. She’s juggling that project, her concern for the children, her growing desire for Finn, and her plans for escape so she can help the Fringe worlds.
The first book has been nominated for two awards (Philip K. Dick Award and Aurealis Award) so this has been an exciting month! In April and May I’ll find out if it won either of them.
Yay! Congrats on the nominations!
So, why sci-fi?
I’ve always loved stories that take me to other worlds. As a child I read a lot of fantasy but these days I read SF, preferably not extrapolated too far beyond the point of believability (as opposed to magic or the supernatural). I like to imagine that one day these stories might be true. I also like the freedom from constraints that SF allows. For example, a purely contemporary story has to stick with existing laws, cultures, places, and so on. SF just invents new stuff.
You've created a complex world of cyphertecks, BRATS, rovers and a living, breathing - basically self-thinking entity, in the planet of Scarabaeus. What inspired it?
Edie’s futuristic world as a whole was inspired by loads of things – I couldn’t possibly track back now and figure out where it all came from. I went with a biological “big idea” for the science part of my science fiction story because my degree is in biology and that’s what I felt most comfortable with.
The planet Scarabaeus, the way things turn out there, was really the natural (that is, unnatural!) result of what happens when the technology goes awry. Genetic engineering can in theory do all kinds of weird and wonderful things. Nature tends to constrain our DNA (although the natural world is fantastically amazing anyway), but if an intelligence could control our DNA, the possibilities are endless. If that intelligence isn’t particularly benign… well, that’s one of those classic “what ifs” that science fiction storytelling depends on.

If you could write outside your genre what would that be?
Actually I’m working on a middle grade contemporary fantasy right now. It’s the kind of book I would’ve loved as a child. The main character’s name is a combination of my two nieces’ names – I’m writing it for them, although with everything on my plate right now they’ll be too old to read it by the time it’s done.
I know that these novels aren't classified as romances but you have a dash thrown in between your main characters and I've got to know, will we see any intimate moments between Edie and Finn in Children of Scarabaeus?
Let’s just say that the relationship progresses. But they have this little problem, in that the leash causes uncomfortable interference in Finn’s head whenever Edie’s emotions are aroused. So until they can fix that, there are physical limits on their interactions. I don’t think readers will be disappointed though.
Do you have a favorite character in your novels? Why?
I have lots! I only write characters that I like, or loathe, or at least feel something for, and that means I enjoy writing them. Edie and Finn have always had most of my attention of course, and I loved writing those characters, their backstories and their interactions, and hinting at their futures. 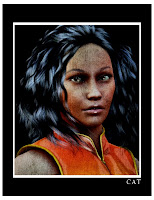 As for secondary characters, in the first book I liked Cat, the feisty navpilot whose loyalties are always a bit murky, and I liked Zeke, the operations teck, whose physical appearance and insolent attitude I based on the character Parker (played by Yaphet Kotto) in the first Alien movie. In the second book my favorite character is the boy Galeon, who forms an instant bond with Finn because he doesn’t have a male role model. I based him on my nephews of about the same age, although his life is vastly different from theirs. (Although I do believe they spend about as much time on the computer as Galeon does.)
How did you celebrate the sale of your first book?
I was trying to get pregnant so I wasn’t drinking – no champagne for me. My husband took me to Baskin & Robbins and I had ginger icecream.
Do you listen to music while writing? If so, what’s on your playlist?
No, I tend to write in silence. I do like to plot by listening to emotional orchestral music (nothing with lyrics, as that’s distracting). I plotted much of Song of Scarabaeus listening to Jean Michel Jarre’s Rendezvous, which ten years ago was one of the only orchestral CDs I owned.

Are you currently working on anything and do you have any more novels planned for the Scarabaeus series?
This series is done, at least for now. There are all kinds of places I could take it but I have too many other projects vying for my attention. I’m working on the middle grade book mentioned above. I’m writing another space adventure romance, which may end up being two or three books. And I’m writing a far-future sci-fi romance with quasi-fantasy elements. I started that one years ago and it includes what you might call steampunk elements, although I didn’t realize it at the time. The book has more of an ancient Greece feel to it than Victorian. Greekpunk?
Quickies:
Dog Ears or Bookmarks? Bookmarks – scraps of paper, as I can never find a bookmark when I need it. I feel very naughty turning down the pages of a book.
Hot or Flirty? I read both and have written both, but my books at the moment are flirty. Usually I do prefer hot to be preceded by a bit of flirty.
Contemporary or Historical? I don’t really read contemporary any more. I like historicals although not romances. I’m fascinated by history – the way ordinary people lived, especially.
Suspenseful or Tearful? Suspenseful.
Angels or Demons? Angels are definitely more interesting. In mythology, angels are beings created by God to willingly obey him, as opposed to humans who must choose. Yet they supposedly have free will. That’s a nice contradiction. Fallen angels, of course, are the most interesting of all.
Coffee or Tea? Tea before eleven, then coffee. Afternoon cup of tea (with hot cross bun during this Easter season). Decaf coffee after dinner.
Beer or Wine? Wine, unless it’s very very hot and I’m very very thirsty.
Light or Dark? I’m a sucker for gritty stories – literally dark and dismal worlds. I also like a happy, hopeful ending. So I’ll go with grey.
Fast or Slow? I prefer life to be slow, no surprises, no stress. I prefer fiction to be exactly the opposite.
Night Owl or Early Bird? I was a night owl until my daughter was born. Now I’ve been dragged kicking and screaming into the world of early birds.
It was great having you over Sara! Do you have last words for our readers?
Thank you so much for having me! I hope everyone enjoys Children of Scarabaeus. Like most authors I love reading your reactions to my books – reviews or emails or whatever, so don’t be afraid to tell me what you think. Happy, chocolaty Easter to everyone.

-Giveaway-
Sara has graciously offered to giveaway two Children of Scarabaeus signed bookmarks to readers! Only ten of these very cool bookmarks were made. Just leave a meaningful comment/question for Sara, don't forget to include a way to contact you, and I will pick two winners at random on April 22nd. Good luck!
Posted by Crystal @ RBtWBC at 4/07/2011 06:00:00 AM