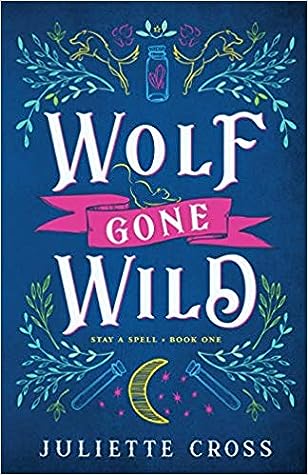 What's the worst thing that can happen to a werewolf? Unable to shift for three months, Mateo Cruz knows all too well. His wolf has taken up residence in his head, taunting him night and day with vividly violent and carnal thoughts. Convinced he's cursed, he needs the help of a powerful witch before he literally goes insane.

Evie Savoie has always obeyed the house rules of her coven--no werewolves. They're known for being moody and volatile. So, when a distempered, dangerous werewolf strolls into the bar and almost strangles one of her late-night customers, she's ready to bounce him through the door. But the desperation in his eyes when he begs her to help him softens her heart and convinces her to bend the rules.

What Evie doesn't know is that Mateo's wolf has a mind of his own. And now that she's in his sights, he wants only one thing. Her.

Juliette Cross racks up a fun start to her new Stay a Spell paranormal romance series with Wolf Gone Wild. This opening salvo introduces the close-knit Savoie sisters, powerful witches whose family has reigned over New Orleans for three generations, and a diverse array of supernaturals who also populate this world including werewolves, vampires, grims (short for grim reapers) and “Z,” a zombie cat. The Savoie siblings endeavor to enforce the magical laws by being tough while remaining just. While the witches and vampires are organized and have their own guilds, the werewolves are disorganized and mostly keep to themselves.

Mateo Cruz, our werewolf hero, is in desperate straits. He’s not been able to shift into his wolfy self for three months and his wolf, “Alpha,” is driving him raving mad with a continual stream of primitive, maniacal thoughts. As the story opens, Mateo is seeking the Hex-breaker, one of the Savoie sisters, even though it’s well-known that the Savoies do not deal with wolves.

Adding to our heroine Eveleen “Evie” Savoie’s bad day, she now has a werewolf at the bar where she works begging her to break the hex on him. While the unbreakable “No Werewolves” rule keeps running through her head - because they were unstable and regularly afflicted with blood lust - she can’t ignore his obvious pain or his fine physique. She agrees to take him to Jules, Evie’s oldest sister, to plead his case. Surprisingly, Jules agrees that they will take his case. Thus, the quest to save Mateo begins…

Mateo snagged my heart from the get-go. He’s a tall, dark and jaw-dropping handsome tortured artist with unruly locks that I badly wanted to set to rights. His artistic talent is in creating metal sculptures that appear to be alive with movement. He is supportive of Evie and encourages her talent, vitality and uniqueness. And, as Evie’s sister, Violet, pronounces “artists are always good in bed.”

Besides being a talented curse/hex breaker, Evie is also a huge comics and sci-fi nerd. She has her own Harry Potter wand and inhales everything Star Wars. As Evie declares “comics are life.” She works at the Cauldron, her family’s bar/restaurant, and helps out in her sister Clara’s Mystic Maybelle’s shop. I wanted to wreak vengeance on a certain wizard who used Evie and made her question herself and her own artistic talents. I loved how Mateo is so supportive of her and helps her gain confidence. Their romance is a sweet and sexy slow build. As each came out of their comfort zones and they spend time together, their friendship becomes more and they clicked.

Following please find a few of my favorite lines from Wolf Gone Wild:

And who didn’t want a hot werewolf to make a girl feel good?
---
“If you’re half as hot as I get just when you walk into a room, then I’m a happy man.”

Her fingers combed through my hair then slipped to the nape of my neck. “Then you should be a totally, blissed-out, high-as-a-kite happy man.”
---
I kissed his scruffy check, my heart pounding like mad. “I love you. So much. I love you.”

His mouth tipped up on one side. “I know.”

This was one of my most anticipated reads this year and, while it’s quite different from her previous books, I wasn’t disappointed. Wolf Gone Wild is a cute werewolf story that is light-hearted, witty and sexy with twists and turns galore. Juliette did a great job keeping the villain herein under wraps until the oh-my-that-was-unexpected ending. Supporting characters are fascinating and quirky – and I want to know all of their stories! I’m especially dying to learn Jules’ and the Lord of the New Orleans vampire cover Ruben Dubois’ got-to-be-mind-blowing-back-story. Then, there’s Mateo’s arrogant guitarist cousin, Nico, who seems to have his eyes focused on Violet Savoie. Regardless, I can’t wait to read the next tale Juliette weaves in this series, Don’t Hex and Drive, coming in Fall 2020!