#Interview with Sonali Dev of The Wedding Setup: A Short Story + #Giveaway The Wedding Setup may be a short story, but it is tremendously powerful. How would you describe it to readers?

Thank you. It’s the story of a girl who used to be a rebel who followed her heart and fought for what she wanted, and then her brother’s death leaves her responsible for her widowed mother. It’s about being knocked off your feet and getting stuck, and learning how to stand back up and reclaim yourself.
The story invites us to take an intimate look into a mother-daughter relationship. This is a universal theme, however, you also steep the plot in your own Indian heritage. Can you tell readers what this story means to you as a daughter? What it means to you as an Indian woman?

There is so much of my own relationship with my mother in this book. We’ve always been incredibly close. She’s outspoken and confident and she modeled some powerful behaviors for me growing up about owning her own body and her voice. But there were the other parts where she was a product of her time and culture, believing in absolute terms that it is a woman’s duty to nurture her family, to marry ‘at the right time,’ to be a certain kind of mother. These are things she pushed hard. Things I internalized but also fought to do on my own terms and not hers. Ayesha’s relationship with her mother used to be this way, and then a tragedy changes their dynamic. So, it’s an exploration of how battles for identity get derailed by tragedy and grief and what it takes to heal.
Ayesha’s mom describes her as obedient, responsible, and “always putting everyone else before her own needs.” After hearing this Ayesha (internally) feels hypothermic. Can you explain how these seemingly sweet compliments completely destroy your heroine?

The mother-child bond comes with a kind of intuitive understanding of each other that’s unique to that relationship. So, while Ayesha has lost her fiery spirit and both she and her mother have lost years to their grief and struggle to survive, her mother knows who her daughter is deep down and how much she’s buried. So there’s a very nuanced intent to these ‘compliments’ and they hit the nerve they’re meant to hit. Ayesha’s reaction to these words is her dead parts coming back to life.
It only takes a moment—one second—for Ayesha to break free from her ice…a single word from Emmitt has her coming back to life. Why does she have such a powerful reaction to someone she hasn’t seen in seven years?

Ayesha had a crush on Emmitt for many years before they got together. She’s always had a strong reaction to him. The years they spent together as young adults were years when she came into herself, and felt seen and cherished. Then she loses all of that when her brother dies and they break up. So, it’s a combination of things that come together when Ayesha meets Emmitt again. They have a natural connection, but also, with his return come all the memories of who she used to be and how much she used to let herself feel.

Ayesha has never forgotten how Emmitt turns “her messy, impulsive, unfettered emotion into something beautiful.” But she has forgotten the effect that she has on him. What buried memories are uncovered as she watches Emmitt react to their reunion?

Emmitt has always dealt with the world and the pain it causes him by keeping everyone at arm’s length. But Ayesha destroys his defenses with her ability to love (and do everything else) so fiercely. So, when he loses her he’s already lost his ability to protect himself. Their joint grief is what separated them, so, while they understand each other’s pain they both also understand the loneliness of not having each other to lean on. They’ve had to make the journey to healing individually, but meeting each other again brings up the piece that needs the other to heal.
How did you get to know your couple? How were you able to understand what was needed to heal their broken hearts?

The one theme that threads through all my books is finding yourself on the tightrope between personal freedom and responsibility to family and community. Healing is always about finding or rediscovering your love for yourself. So, I understand my characters through that lens: how have they lost themselves? What about themselves do they need to reclaim and fall in love with? A truly connected couple is one who aids this journey in each other, recognizes it, and supports it.
In a limited number of pages you not only give readers a living, breathing couple, but also an avalanche of equally interesting characters like Ayesha’s best friend, suitor, aunties…and you even create depth with characters that are no longer living. Why was it so important to spend time with these secondary characters? What do they reveal about your hero and heroine?

I believe that as humans we are a sum total of our relationships and the world we live in and build for ourselves. How someone treats other people and how they respond to how they are treated is what constitutes character.

At its heart, every story is about a person who is somehow at odds with the world they live in or with themselves because of the expectations of their world, and the journey they make to resolve that conflict. Ayesha wouldn’t be Ayesha without her mother and Bela, her best friend and the community she was raised in. Bela has been her wild other half growing up, then their paths diverged, but they continued to be each other’s support. Her mother has become a crutch she uses to hold on to her grief. Emmitt’s grief over his friend has run his life for seven years too. So the secondary characters are just as integral to the story as the protagonists.

While the plot focuses on grief, there is also great joy to be found. After all, the backdrop of the story is a giant wedding. What do you personally find the most fun at a traditional Indian wedding celebration?

I’m always only there for the food and dancing! Fine, and getting to dress up. And the wine. Also, maybe the chance to hang out with family and friends I only see at weddings. And the drunk aunties and uncles.

After readers devour The Wedding Setup, which of your other books would you recommend they read next?

First, thank you so much for devouring The Wedding Setup! I’m incredibly proud of my Raje series, a set of retellings of my four favorite Jane Austen novels set in a politically ambitious Indian American family from Northern California. Pride, Prejudice, and Other Flavors is a gender flipped Pride and Prejudice. Recipe for Persuasion is a two-generational homage to Persuasion set on a Food Network show. Incense and Sensibility, the love story between a gubernatorial candidate and a yoga therapist who can save him but also destroy his campaign, pays tribute to Sense and Sensibility. And the upcoming The Emma Project (May 17th 2022), which is a gender flipped Emma that explores what it means when a person with tremendous privilege offers charity to someone who has much less. 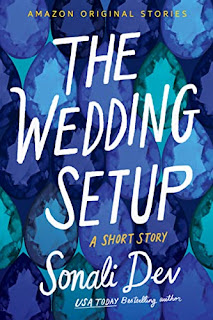 From USA Today bestselling author Sonali Dev comes a heartfelt short story about one woman’s journey of self-discovery and what it means to be happy.
Ayesha Shetty lost her brother seven years ago, the same time she lost everything else important to her: her dreams, her fierce independence, and the man she loved. Not wanting to see her mother hurt anymore, she put her wild self away and became the dutiful daughter her mother needed and took on her brother’s role in the family business.
Now her best friend’s big, fat Indian wedding is a chance to get away from her endless duties at the restaurant and maybe even have some fun (if she remembers how). But a setup arranged by her mother, with a doctor no less, is the last thing she needs. The fact that he checks all her mother’s boxes just makes everything better…and worse.
Then Emmitt Hughes shows up. Her brother’s best friend. The love she once chose over family duties and her responsibilities. The one she asked to leave, and who did. The one who knows the real Ayesha. Torn between a love from the past that could cost her the only person she has left and her sense of obligation to her mother, will Ayesha find the strength to stop thinking about what everyone else wants and finally put herself first? Or is the old Ayesha truly gone for good? 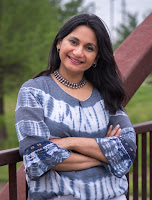 USA Today bestselling author Sonali Dev writes Bollywood-style love stories that explore universal issues. Her novels have been named best books of the year by Library Journal, NPR, the Washington Post, and Kirkus Reviews. She has won numerous accolades, including the American Library Association’s award for best romance, the RT Reviewers’ Choice Award for best contemporary romance, and multiple RT Seals of Excellence; has been a RITA finalist; and has been listed for the Dublin Literary Award. Shelf Awareness calls her “not only one of the best but one of the bravest romance novelists working today.” She lives in Chicagoland with her husband, two visiting adult children, and the world’s most perfect dog.
Website: https://sonalidev.com/ 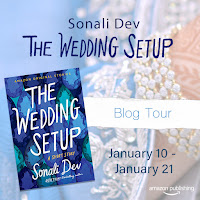